The Chris Waller-trained Haut Brion Her returned to the winners’ circle at Flemington on Saturday claiming the Group 2 Blazer Stakes (1400m) thanks to a peach of a ride from Michael Walker.

Haut Brion Her, a mare by Zoustar, was outstanding over the journey claiming her fifth win from eight starts.

Walker chose to sit on the speed out of the gates to control the race from the front. The pair didn’t look back leading from barrier to box, capping off an impressive victory with a pair of talented Godolphin runners in the field. 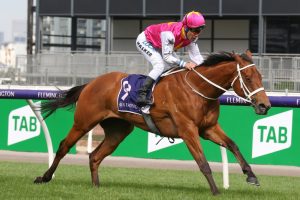 Haut Brion Her came into the race on the back of two runner-up’s at Benchmark level earlier in September. Jo Taylor, Chris Waller’s stable representative, said after the race that her horse was a little more suited to the Flemington track than Melbourne’s other racecourses.

“She struggled a bit with the first two runs, Moonee Valley didn’t quite suit as she labored around that turn, and even Caulfield took a while to really balance up when she straightened. But today here at Flemington Michael knew her well and certainly bided his time and once she found her feet up the straight she was very strong,” Taylor said.

With excellent speed from the front, Haut Brion Her now looks a real chance in next months Group 1 Empire Rose Stakes (1600m) on Derby Day (November 2) at Flemington.

The four-year-old doesn’t hold a current nomination for the race, but Walker still thinks connections should head that way.

“I think so. It’s the first time I’ve ridden her on raceday, but geez her turn of foot down the race, she wouldn’t be out of place in something like that,” the winning hoop said when asked on the Empire Rose.

Haut Brion Her would have plenty of work to do against current race-favourite Mystic Journey as well as Group 1 winners Arcadia Queen and Alizee. But even so, Walker still thinks the horse showed plenty of improvement and signs of promise.

“She just feels so amazing, beautiful big mare and filly and after her work on Tuesday I couldn’t see her beat today,” Walker went on to say.

Pohutukawa ran on well for second on Saturday after finding daylight down the straight. There was no such luck for race-favourite Fidelia though, who struggled to find the line to run sixth.