Chris Waller’s Bill Ritchie Handicap winner Kolding is narrow favourite in a tight top half of the market for Saturday’s $1 million Epsom Handicap 2019 at Royal Randwick. 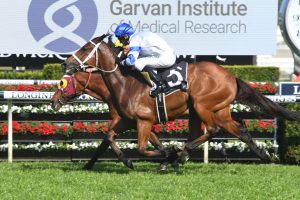 A capacity field of 20 milers were accepted for this year’s Group 1 Epsom Handicap (1600m) on Tuesday and there are four horses fighting for favouritism.

Currently leading the charge at $6 in the latest Epsom Handicap odds at Ladbrokes.com.au is Waller’s Ocean Park four-year-old Kolding drawn barrier 13 with Glen Boss to ride.

Waller has won three of the past six editions of the Epsom Handicap but chases his first win in the classic since the mighty Winx (2015).

The master trainer has a six-horse contingent in the Epsom Handicap field this spring, Kolding the best fancied carrying just 50.5kg.

The gelding made it five wins from his latest six starts on September 21 when carrying 57kg to victory in the Group 3 Bill Ritchie Handicap (1400m).

Boban (2013) for Waller was the last horse to complete the Bill Ritchie – Epsom Handicap double that Kolding is tipped to complete this weekend.

Kolding is out to complete the Bill Ritchie – Epsom Handicap double for the first time since the fellow Waller-trained Boban (2013) Bet now with Ladbrokes.com.au

While on paper the big drop in weight looks advantageous for the current Epsom Handicap favourite, recent history shows that no winner has carried under 51.5kg since Desert War (50.5kg) for his first in 2004.

This year that rules out all but the top five in the field weight-wise including the 57kg topweight Dreamforce.

Dreamforce is one of two equal $6.50 hopes occupying the second line of Epsom Handicap betting.

The last four Epsom Handicap winners have carried 56/57kg to victory and this year John Thompson’s in-form Fastnet Rock seven-year-old is the only galloper that fits that statistic.

Drawn the extreme outside barrier (20 of 20), Dreamforce has an excellent Randwick track record (10:5-2-0) and has been in excellent form this year.

During the autumn he placed third to Winx in the Group 1 George Ryder Stakes (1500m) in the wet before finishing second to brutal in the Group 1 Doncaster Mile (1600m) at Randwick.

He returned with a first-up win by three lengths in the Group 2 Tramway Stakes (1400m) defeating the gun Kiwi Te Akau Shark, before a last start second to Cox Plate favourite Avilius in the Group 1 George Main Stakes (1600m).

In the George Main at WFA Dreamforce carted 59kg so will still come back two kilos with his Epsom topweight on Saturday.

The other $6.50 hope at the opposite end of the weight scale is the flying Rock (50.5kg) chasing a fourth win on the trot this prep.

Prepared by Team Hawkes, the Pierro four-year-old has been working his way through the grades this season and was last seen winning the Group 3 Cameron Handicap (1500m) at Newcastle carrying 56kg.

Rounding out the first four in betting to win the Epsom 2019 at $7 is the aforementioned New Zealander Te Akau Shark.

A one-time favourite for the race after winning a host of races back home, the Jamie Richards-trained Rip Van Winkle five-year-old is third-up this campaign.

He resumed when second to Endless Drama back home in the Group 2 Foxbridge Plate (1200m) before his second in the Tramway behind Dreamforce.

The last of the single-figure hopes meanwhile at $9.50 is UK import Cascadian in gate two for Godolphin last seen running fourth to Kolding in the Bill Ritchie.

Click here for the latest Epsom Handicap 2019 odds courtesy of Ladbrokes.com.au, the race set to run as Randwick Race 7 at 4:05pm on Saturday.