Mister Sea Wolf has firmed notably in 2019 Epsom Handicap odds for next weekend’s Group 1 feature following his charging win in the Group 2 $200,000 Shannon Stakes (1500m) at Rosehill, but trainer Chris Waller has dubbed him an unlikely runner. 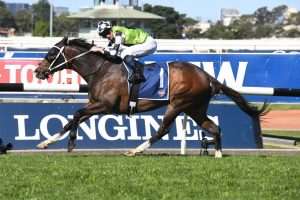 Rated a $9 chance second-up after a sixth in the Group 2 Tramway Stakes (1400m) earlier in the month, Waller’s veteran Amadeus Wolf eight-year-old Mister Sea Wolf showed a tremendous turn of foot to take out the Epsom lead-up.

Celebrating his first win since the Group 3 Doncaster Prelude (1500m) back in late March, the gelding ran a cheeky race with the in-form James McDonald in the saddle.

“He went super today showed great turn of foot on the ground and really strong to the line,” McDonald, fresh off his Moir Stakes win at The Valley aboard the Waller-trained Nature Strip last night, said post-win.

“He’s got to be a chance in the Epsom if he goes that way.

“Good to ride a winner in these colours.”

It was stablemate Tom Melbourne who rolled along up front getting things his way in the lead after the race favourite Gem Song drifted back to settle second after a small fight for the lead.

Mister Sea Wolf and McDonald meanwhile tracked along inside on the rails in third.

Tom Melbourne swung in front around the turn and was still travelling with Gem Song giving chase.

All eyes quickly went to Mister Sea Wolf however who was closing fast up on the fence, moving to take the inside run and charge to the lead for a 1.3 length win over the Kris Lees-trained Gem Song ($2.40).

“There was a lot more spark in himself today – the other day he seemed just a little off-colour, not having any speed but today it was all there and he gave a good fight.”

Before the Shannon Stakes Mister Sea Wolf was a $61 chance in pre-field Epsom Handicap odds at Ladbrokes.com.au.

He has subsequently firmed into $21 in futures Epsom Handicap 2019 betting – available by following the link.

Waller however knows Mister Sea Wolf is better with his runs spaced and said it was unlikely he would be on the short back-up into the Epsom next week.

“It’s unlikely. You’ll see if you look at his form he needs to have his races spaced three to four weeks,” Waller said.

“He puts a bit into his races and he has a few secondary problems after a race where his legs puff up and things like that so you’re always dealing with something.

“With him we’ve found giving him three to four weeks is best so we’ll probably look at something during that time.”