Jockey Hugh Bowman of Winx fame celebrated his fifth Golden Rose Stakes victory in a brilliant 2019 edition of the $1 million feature aboard the Godolphin-raced favourite Bivouac. 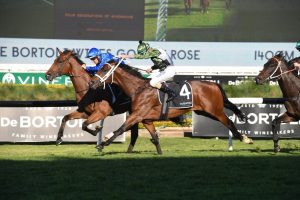 It was the sixth time the iconic Royal Blue colours of Godolphin, formerly Darley, flashed home first in the Group 1 $1 million Golden Rose Stakes (1400m) with Bivouac saluting for the punters at Rosehill Gardens.

Adding huge value to his future value at stud, the well-bred Exceed And Excel colt posted his fifth win at career start number nine proving he could run out a strong 1400m.

First-up Bivouac and Bowman won the Group 3 Vain Stakes at Caulfield, before things went amiss when the two finished second to Exceedance in the Group 3 San Domenico in the wet at Rosehill.

The James Cummings-trained Bivouac returned to winning form with Joshua Parr taking over in the Group 2 Run To The Rose (1200m) on September 14 before Bowman was back for the colt to complete the double for the first time since Astern (2016).

“He’s a lovely colt, his win at Caulfield first up put the writing on the wall, things didn’t go our way second up, but blinkers off and the way Josh [Parr] handled him last start

“Just the way he has progressed and developed as the preparation has gone on, it’s a credit to James [Cummings] and his team.

“Once I made the commitment to ride him, I knew I would be right and the horse has delivered for us all.

“He makes his own luck, the race set up well for us.

“That’s the beauty of horses like this, they make their own luck.”

“There was plenty of quality in the stock behind him, but they’ve got to really lift to beat a horse like this.

“He thoroughly deserved it, he’s a Group 1 winning colt now and he’s still got plenty more in store I can assure you.”

It was a thrilling Golden Rose Stakes with Bowman settling Bivouac second on the rails camping behind the leader Yao Dash.

Kubrick was in a great position third the fence, while the fellow Chris Waller-trained Yes Yes Yes was posted one out one back in fourth.

The previously undefeated Yao Dash led into the straight before Waller’s Run To The Rose runner-up Yes Yes Yes moved up on the outside to challenge.

Bivouac also began to wind-up and it was an exciting two-horse race to the line.

Showing a great will to win Bivouac just wouldn’t go down and fought back in a brilliant finish to hold off Yes Yes Yes, while the San Domenico winner Exceedance ran a nice race for third.

It looks an outstanding crop of three-year-olds this season, but it was all about the Golden Rose winner Bivouac who showed enormous heart and class to take out the elite level.

“I couldn’t help but think he had no right to run 1400m out today, on account of the preparation he had and the culmination of so much effort from this unit to get behind this horse, to give him this build up he had … it was just perfection for the past six weeks,” Cummings said.

“I’m incredibly proud of the whole unit to be able to produce that, and … what a horse. To see Bivouac striding into his sprint at the top of the straight was poetry in motion. He’s a rare horse to have in our care, and an absolute pleasure to have in the stable.

“He’s an experienced horse. You might say I served it up to him as a two-year-old but I could see what he can handle. He returned this campaign just a bundle of health, energy, athleticism. It wasn’t necessarily ideal having so many runs before a Golden Rose like this early in the Spring.

“I mean, it’s only September and I’m saddling him up and he’s feeling good about himself. We know the key to the horse, we taught him to relax, we’ve trained him to run seven furlongs and you know he’s probably the best six-furlong three-year-old in the country. It’s a wonderful credit to the horse.”

There are now options galore for the up-and-comer including a possible shot at the $14 million The Everest (1200m) at Randwick on October 19 should the three-year-old secure a slot in the world’s richest turf race.

“What do you do? He’s fought back through the line. I think races like the Coolmore are on the table. The Caulfield Guineas is worth consideration but he’s probably just too brilliant for that race so, yes, the Everest is an option,” Cummings said.

“I’ve had jockeys willing to ride him at 53kgs telling em all week he can’t get beaten in the race (Everest). I just can’t make that call. He’s a young colt, he looks a young colt who’s been able to show that sort of brilliance to break 34 for the last 600m in a Golden Rose and hold off a highly accomplished horse who beat him in the Todman as a two-year-old when things didn’t go ideally for him.

“But he’s roared through the line and been too strong. There are plenty of options for us on the table – we are in a very commanding position with a horse like him and we’ve got a very important two weeks ahead to decide exactly what we do pay up for at 10am before the Everest.”

Bivouac has firmed in from $26 to $13 in futures The Everest odds at Ladbrokes.com.au.

One race Cummings has ruled Bivouac out of is the $2 million Ladbrokes Caulfield Guineas (1600m) saying the colt looked too brilliant for the mile feature in Melbourne on October 12.

He could still race in Victoria leading all-in betting at Ladbrokes.com.au at $6 to win the Group 1 Coolmore Stud Stakes (1200m) down the Flemington straight on Derby Day.