Nominations closed on Tuesday for this year’s Group 1 Kennedy Oaks (2500m) with an increased number of 95 hopefuls looking to gain entry into the $1 million feature race on November 7 at Flemington. 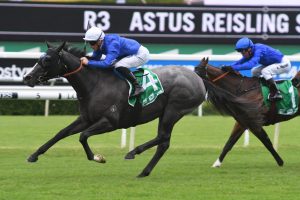 Tenely is one of the top 2019 VRC Oaks nominations for the Godolphin stable. Photo: Steve Hart.

New father-son duo Tony and Calvin McEvoy make up the bulk share of this year’s nominations with eight total entries, while Wednesday’s Kenendy Oaks Trial winner Celestial Falls is the current favourite in the 2019 VRC Oaks odds at Ladbrokes.com.au paying $10.00.

The Mark Newnham trained three-year-old was second-up at Flemington, showcasing an explosive turn of foot after looking a little keen early.

The Group 1 winning trainer said after the race he always had the Oaks in mind for Celestial Falls and hopes he can capitalize on the same path Greysful Glamour took last year before running second.

“Lovely big relaxed filly, always shown that she’ll stay. Didn’t have any hesitation going from 1300m to 1800m with the second-up, she only had a small three-week break from a win at Randwick as a late two-year-old, and I always had the Oaks path in mind for her,” Newnham said.

Flit and Tenley, who also hold a spot in the Group 1 $5 million Caulfield Cup, sit on the third line of VRC Oaks betting at $15.00.