2019 The Shorts Results: The Everest Next For Pierata

Pierata put in a perfect lead-up run into next month’s $14 million The Everest holding off Classique Legend and the brilliant warhorse Redzel in a thrilling The Shorts 2019 win at Royal Randwick. 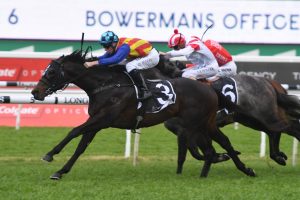 There were just five sprinters left in the mix for this season’s Group 2 $500,000 The Shorts (1100m) after the threat of a Heavy track saw six early scratchings.

A gun lead-up into the world’s richest turf race, The Everest over 1200m back at the track on October 19, The Shorts was still an intriguing and entertaining battle won in the end by the Gregory Hickman-trained Pierro entire Pierata.

Five-year-old Pierata jumped the punters’ pick in The Shorts betting at Ladbrokes.com.au after his brave second to Redzel first-up in the Group 3 Concorde Stakes (1000m).

Celebrating his first victory since the Group 1 All Aged Stakes (1400m) over Osborne Bulls back in the autumn, Pierata and jockey Tommy Berry did the chasing in The Shorts settling fourth on the outside.

Dual The Everest champion Redzel got away well on the inside and got things his way up front charging up to lead the small field around.

Peter & Paul Snowden’s $15.6 million earner was still travelling as The Shorts contenders rounded the corner and hit the home straight.

Jockey Nash Rawiller quickly got off the rails on the returning Arrowfield 3YO Sprint winner Classique Legend with the Les Bridge-trained grey moving into the centre to challenge.

It was a three way battle over the closing stages by three confirmed The Everest contenders, Pierata ($2.70) too strong in the end saluting for the punters with a powerful finish to defeat Classique Legend ($3) and Redzel ($4.50).

“The race has worked out perfectly, he let down and fought really hard to the line. He is right where we want him,” Hickman said of his winning sprinter Pierata.

“In the small field, they tend to be a bit more wary of where they are the jockeys and just having him that little bit closer so it wasn’t as big an effort as last time.”

Classique Legend will take great improvement from the run and looked impressive fresh heading into The Everest field, while seven-year-old Redzel was gallant in defeat suffering from second-up syndrome.

“He just probably lacked that match fitness against those big boys, but he’s proven today that he can certainly match it with them.

“It’s pretty exciting going forward. He seems to have come through the run unbelievably well and just looking forward now.”

Pierata remains at the top of The Everest 2019 betting firming in from $6 to $5 through Ladbrokes.com.au just ahead of Santa Ana Lane, one of the six horses scratched from The Shorts field, with Hickman undecided on whether the horse will have another run in the lead-up.

“He loves Randwick and the Everest is at Randwick,” Hickman said.

“We’ll just wait. We’ll see how he is at home. If I think he needs it we will go around or if not he won’t be. He’s as good as he’s ever been so we’ll be in the money somewhere.”

Winning hoop Berry was thrilled with The Shorts result and keen on his mount’s chances in The Everest 2019.

“I went a bit earlier on him than I would have liked, I was trying to get around Home Of The Brave and shut the door on Nash [Rawiller on Classique Legend], but he poked his head through anyway,” he said.

“My bloke when he felt Classique Legend come he just surged again. He is such a trier and he knows where the winning post is.

“Greg and I have been saying all prep that he has come back bigger, stronger and better. And he has. This means so much. It’s not a Group One but there is another one coming I think.”

“I’m so happy for Greg, he has done such a great job with this horse and he has got an unbelievable group of owners, you’ll see them celebrating. Bring on three weeks time!”

Redzel and Classique Legend meanwhile were at $8 in The Everest all-in odds for the hugely popular buy-in feature before the latter firmed into $7 after his first-up second.

“Happy with his run, he knuckled a bit out of the gates, which got him off balance a shade, he soon moved well, we were there at the top of the straight with a good chance and he’s ran well,” Kerrin McEvoy said of the third place effort from Redzel.

“Knowing the Snowdens they haven’t got him screwed down yet and we’ve got a month before the Everest, so looking forward towards the next race.”