Two confirmed The Everest horses have been scratched from Saturday’s 2019 The Shorts field at Royal Randwick with both Santa Ana Lane and Sunlight coming out of the event due to the Heavy track conditions in Sydney. 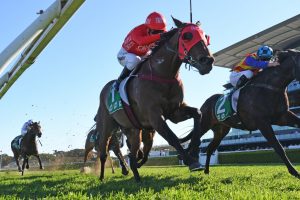 Two-time The Everest champion Redzel is now favourite to win The Shorts 2019 at Randwick this weekend. Photo: Steve Hart.

Randwick is currently rated a Heavy (9) ahead of George Main Stakes Day, with the mud track most notably affecting the line-up for this year’s Group 2 $500,000 The Shorts (1100m).

There are now nine sprinters left in the short-distance feature being used as a lead-up into the $14 million The Everest (1200m) back at the track on October 19.

The impressive 3.5 length TJ Smith Stakes champion will instead race on October 5 in either the Group 2 Premier’s Stakes (1200m) in Sydney or Melbourne’s Group 2 Gilgai Stakes (1200m) before his run in the world’s richest turf race.

Last spring Santa Ana Lane, now a five-time Group 1 winner, ran sixth on a Heavy (9) track in The Everest results before a next-up victory in the Group 1 VRC Classic (1200m) down the Flemington straight.

The other scratching from The Shorts field is gun Zoustar mare Sunlight, the $4.38 million earner a three-time Group 1 winner in Melbourne.

She ran first-up in the Group 3 Concorde Stakes (1000m) finishing second last when fifth behind Redzel.

The four-year-old is now likely to contest the Group 1 $1 million Moir Stakes (1000m) at The Valley next Friday night.

Redzel meanwhile celebrated his third straight Concorde Stakes success on September 7, the two-time The Everest champion looking to continue his gun start to the spring second-up in The Shorts.

The Peter & Paul Snowden-trained son of Snitzel has to date amassed over $15.6 million in prize money and won The Shorts in 2017 before his inaugural The Everest victory.

Redzel is out to become the first dual The Shorts winner on non-successive years since Winnipeg (1941, 1944).

The now seven-year-old is drawn the rails and currently sits as the firming $3.70 favourite in The Shorts betting at Ladbrokes.com.au.

It is a wide open edition of the race with a further three single-figure hopefuls including Classique Legend ($4) and Pierata ($4.20) who have both also already been confirmed to run in The Everest field next month.

His latest run produced a Group 2 Arrowfield 3YO Sprint (1200m) win at Randwick on April 13 and he has had two subsequent trials at the track ahead of his campaign kick-off in The Shorts.

Pierata meanwhile is still under some doubt regarding a The Shorts run with connections keeping an eye on the weather and track ahead of race day.

The Gregory Hickman-trained Pierro stallion is the current $6 co-favourite in futures The Everest betting after the All Aged Stakes winner kicked things off with a Concorde Stakes second to Redzel.

Osborne Bulls is the next best in The Shorts odds at $5, but Godolphin have warned he too could be scratched from the race.

The Street Cry six-year-old is looking to shrug his placegetter status after running second in his five last starts all at Group 1 level.

That included behind Sunlight in the Newmarket Handicap, Santa Ana Lane in the TJ Smith and Pierata in the All Aged Stakes.

He was last seen finishing second behind Kiwi raider The Bostonian in Brisbane’s Group 1 Doomben 10,000 (1200m) back in May and is a genuine contender for Godolphin’s slot in The Everest race this year.

The other horse assured of a The Everest run engaged in The Shorts field is In Her Time, first-up winner of the Group 1 Black Caviar Lightning (1000m) at Flemington when beating home Osborne Bulls in mid-February.

Kris Lees’ seven-year-old Time Thief mare is a $12 chance to salute fresh this Saturday with her last run on Heavy going being her seventh in The Everest 2018.

The 2019 The Shorts is set to run as Randwick Race 6 at 3:15pm (AEST) on Saturday, with betting on the race available by following the link to Ladbrokes.com.au.