Everything worked out perfectly for Gai Waterhouse and Adrian Bott on Friday as Japanese import Hush Writer claimed the Group 3 Newcastle Cup (2300m).

The Waterhouse stable has now won the time honoured race six times dating back to 2001, but this one was extra special with the five-year-old setting a new race record in the time of 2:34.35.

Hush Writer opened as the $5.00 second-elect with Ladbrokes.com.au after running second in the Listed Wyong Cup a fortnight ago. Jockey Tim Clark earned the ride this time around, and wasted no time settling off the speed close to the rail.

“This wind’s a bit difficult to sort of cut into and win, so we decided early in the day that we’re changing our plans a little bit,” Clark said.

“The pace was lovely throughout, just a nice even gallop. I was confident a long way out, gee he travelled.” 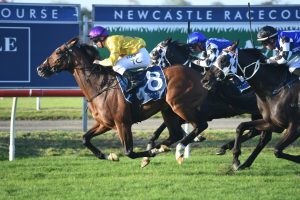 Hush Writer is set to line up in next month’s Group 1 The Metropolitan at Randwick on October 5. Photo Credit: Steve Hart.

At the bend, the pair moved up into third after finding cover before hitting the line strongly to outlast second place-getter Attention Run. As for the plan ahead, Adrian Bott wasted no time addressing Hush Writer’s target.

“He’ll go to the Metropolitan next, that’s the race we had him targeted towards and then we can make a few plans after that,” Bott said.

Hush Writer, who had won only two of his 11 starts prior to the race, found an extra gear down the straight to go on and win by half a length. Like the Waterhouse stable, this wasn’t the first Newcastle Cup win for Clark, having won the race previously aboard Broadside in 2017.

“The race worked out perfectly to be honest. We wanted to get a bit of cover today and it was a real genuine test that allowed us to slot in beautifully from what could have been a real awkward draw, but Tim (Clark) did a great job and as I said a real genuine tempo, loved the way he was traveling there from the 800m onwards” Bott went on to say.

Mawaany Machine set a cracking tempo early from the gates, going on to lead by three lengths at the 900m mark. Hush Writer found an ideal spot down the center of the track and looked unfazed with Chris Waller’s Our Candidate bearing down on the outside.

Unfortunately, there was no such luck for Red Cardinal as the Melbourne Cup hopeful only managed fifth after showing little turn of foot.

Hush Writer has firmed into a $17.00 chance in the All-In Metropolitan Handicap betting markets at Ladbrokes.com.au.