Epsom Up Next for Cameron Handicap Winner Rock

The market was dead on at Newcastle on Friday as the Hawkes-trained Rock saluted for punters in the Group 3 Cameron Handicap over 1500m.

The four-year-old by Pierro opened at $3.00 odds with Ladbrokes.com.au prior to the jump after a pair of benchmark wins at Canterbury and Kensington leading up.

Those that got on were left with a nervous wait as jockey Tommy Berry found himself trapped second-last at the 400m mark, right before shifting to the outside to descend on the leading Articus down the straight. 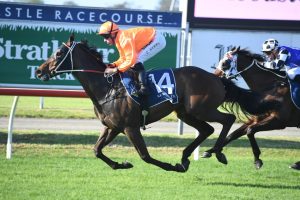 Rock has firmed onto the second line of betting in Ladbrokes’ Epsom Handicap market following a big win at Newcastle on Friday. Photo Credit: Steve Hart.

Rock has now won four from eight career starts as Michael Hawkes eyes a start in next months Group 1 Epsom Handicap (1600m) at Randwick on October 5.

“I was pretty ecstatic really, he had to do it tough albeit the light weight. The way the race panned out early, it just had no speed and he had to go back further than we had anticipated. But to Tommy’s credit he got him into a nice rhythm and got him going on the corner, and he’s got that explosive turn of foot,” Hawkes told Sky Racing after the race.

“He’s a good horse in the making and look, he’s got a date with the Epsom now.”

Not surprisingly, bookies have acted accordingly with Rock firming from a whopping $51.00 into $10.00 in  All-In Epsom Handicap betting markets at Ladbrokes.com.au.

Berry said after the race he had to remain patient but was more than happy to credit the horses explosive speed over the final 200m.

“Massive win. I said to Michael it’d be lovely if we get a nice spot midfield with a bit of cover but that was clearly not going to happen after a furlong so I had to take him back further than I wanted him to be. The grey in front of me was off the bit at the 600m and I was hoping he’d take me into the race and he didn’t, so full credit to this bloke, he had the toughest run and he was the best horse,” Berry went on to say.

Nettoyer, who remains a $26.00 chance in the latest 2019 Epsom Handicap odds, also ran home strongly for third on Friday.

Kaonic was another late eye-catcher for trainer Chris Waller flashing home for fourth.