A chance to secure a ballot free ride into next month’s Caulfield Cup field is up for grabs in Melbourne on Saturday with the running of the Naturalism Stakes 2019. 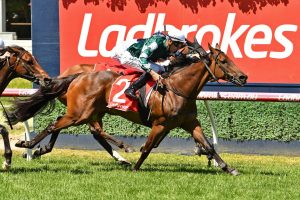 Sikandarabad is the market mover to win the Caulfield Cup ballot exemption with a Naturalism Stakes victory on Saturday. Photo: Ultimate Racing Photos.

All but one of the remaining runners in the line-up – the Chris Waller-trained So You Win – are nominated for the Group 1 $5 million Caulfield Cup (2400m) on October 19 back at the track.

Jameka (2016) was the last horse to complete the Naturalism Stakes – Caulfield Cup double and thus spring it is the Lindsay Park-trained Sikandarabad tipped the most likely to win the first leg.

Heading Naturalism Stakes betting at $4.80 through Ladbrokes.com.au, the seven-year-old chases his first victory since a black-type over the same track and distance back in February.

Third-up on the weekend, Sikandarabad was last seen finishing sixth in the Group 2 Feehan Stakes (1600m) and should appreciate the extra metres in an easier race here.

Sikandarabad has firmed in the markets for Saturday’s Group 3 in from opening odds of $6 and now shares the top line of betting with stablemate Super Titus ($4.80).

Super Titus with just 50.5kg in the Caulfield Cup weights is even further down the order of entry for the mile and a half classic (86th) despite a last start victory.

The Dansili six-year-old saluted in the Listed Heatherlie Handicap (1700m) at the Caulfield track on August 31 carrying 54kg and gets in on the same weight this weekend with Craig Williams coming aboard.

The lightly-raced import – rated a $51 Caulfield Cup hope –  is drawn to get a favourable run in the Naturalism from barrier two as he looks for back-to-back wins at the course.

The shortest-priced of the Naturalism Stakes horses in the ante-post Caulfield Cup odds at $34 is the also David & Ben Hayes and Tom Dabernig-trained Neufbosc ($34).

Carrying 58kg topweight on Saturday, the French-bred Neufbosc is also drawn the outside barrier with Dwayne Dunn aboard the Mastercraftsman grey.

Group 1 placed in France, the import is out to atone for a second last in the Feehan Stakes and is a $34 roughie hope this weekend.

The flying Linda Meech is aboard the Novellist five-year-old, Meech replacing Tim Clark in the saddle.

First-up Wolfe won over 1800m at the Kensington track before a last start eighth in the Group 3 Premier’s Cup (1900m) at Rosehill when hampered by a Heavy (9) course.

Wolfe is in desperate need of the Caulfield Cup ballot exemption sitting near the very bottom of the ballot (112th) with only 50kg for next month’s Group 1.

Other standouts to steal the show on Saturday include Ramsden Stakes winner Steel Prince ($7) coming off a first-up fourth in the Heatherlie, the rails-drawn Rowley Mile runner-up Supernova ($8) and Godolphin’s runner Etymology ($8) who has three thirds from three runs at the track.

The 2019 Naturalism Stakes runs as Caulfield Race 6 at 3:35pm (AEST) on Saturday, betting on the race is open now by following the link to Ladbrokes.com.au.