Mystic Journey plus 101 other hopefuls remain in the mix for a shot at The Valley’s $5 million Ladbrokes Cox Plate next month following first acceptances for Australasia’s weight-for-age championship.

The 102 Cox Plate first acceptances cut the list of potential runners in the 2040m classic on October 26 down from 187 at nomination stage and is up more than 60% on last year’s first declarations. 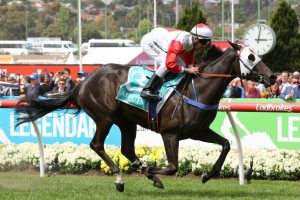 Without four-time Cox Plate champion Winx in the mix, it is a far more open affair for this year’s edition of the ‘race where champions are made’ – which marks the 99th anniversary of the Cox Plate.

Among the official 2019 Cox Plate first acceptances are 36 Group 1 winners including the early favourite at race sponsor Ladbrokes.com.au, Mystic Journey.

The brilliant mare hunts for win number eight on the trot at Flemington this Saturday in the Group 1 $750,000 Makybe Diva Stakes (1600m), victory in which will see her current all-in Cox Plate odds firm further.

Heart’s Cry mare Lys Graciux is unraced down under, but her recent form this year has been outstanding including a three length Group 1 success over 2200m at Hanshin.

She is one of 17 internationally-trained Cox Plate first acceptances, the list of overseas raiders targeting the event up from nine in 2018.

Other standout internationals include fellow Japanese-trained Kluger and David Menuisier’s Group 1 winner in Germany last time out Danceteria who have accepted the Moonee Valley Racing Club’s invitations to run in the classic.

Trainer Chris Waller has withdrawn his recent stable acquisitions from WA Enticing Star and Arcadia Queen, both set to run in the $14 million The Everest (1200m) at Randwick on October 19.

Waller could still have a hope of retaining the Cox Plate trophy post-Winx with 16 remaining entries including last year’s Melbourne Cup fourth placegetter Finche along with his smart filly Flit.

Flit is one of 19 three-year-olds still featuring in the Cox Plate entries along with the likes of Champagne Stakes winner Castelvecchio and the JJ Atkins winner Prince Fawaz.