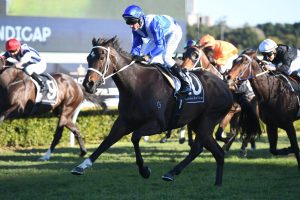 Chris Waller’s classy mare Girl Tuesday is among the 2019 The Metropolian Handicap nominations for this spring. Photo: Steve Hart.

Not surprisingly, trainer Chris Waller has dominated the early entries with 14 runners, the headliner being Girl Tuesday, who ran third to Samadoubt and Avilius in last weekends Group 2 Chelmsford Stakes.

Girl Tuesday has opened equal favourite at $11.00 with Ladbrokes.com.au in futures The Metropolitan betting alongside Mark Newnham’s Scarlet Dream, who ran second first-up at Randwick last weekend in a Benchmark 94.

British raider Supernova can also be found on the same line of betting for the Hawkes stable. The five-year-old looked impressive during his return to the races back in August running second over 1600m at Hawkesbury and will now look to step up beyond the mile for the second time down under after running sixth in the Group 2 Chairman’s Quality back in April.

Waller has also nominated Youngstar for a run in The Metropolitan despite a pair of average performances over the last fortnight. Youngstar ran eighth in the Group 1 Winx Stakes first-up at Randwick, and seventh in last weekends Chelmsford Stakes second-up.

Gwenda Markwell’s Angel of Truth, winner of the Group 1 ATC Derby (2400m) back in April, has opened at $15.00 all-in The Metropolitan odds for 2019 alongside Youngstar and a host of others.

Full Ladbrokes.com.au The Metropolitan odds can be found here.