The 2019 Ladbrokes Cox Plate is very much on the spring agenda for the Team Williams-raced Homesman who returned to The Valley for an impressive first-up win in the Group 2 John F. Feehan Stakes (1600m). 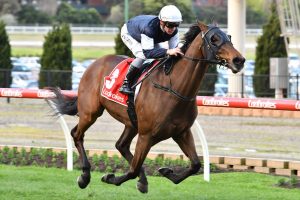 Homesman is into the 2019 Cox Plate field thanks to an impressive Ladbrokes Feehan Stakes win at The Valley. Photo: Ultimate Racing Photos.

Runner-up in the Cox Plate qualifier 12 months ago, the now six-year-old son of War Front went one better in the Ladbrokes Feehan Stakes results for 2019 bolting home for a 2.5 length win over $26 roughie Mahamedeis.

The victory earned the high-class stayer a ballot free ride into the Group 1 $5 million Ladbrokes Cox Plate (2040m) back at the track on October 26, a weight-for-age classic co-owner Nick Williams said the team were very keen to win.

“He was terrific today; I can tell you there’s nothing more in racing that would mean more to us than getting our hands on a Cox Plate,” Williams said following the win.

“We’ve tried many times and come up short.

“Benny gave him a 10/10 ride, it was absolutely terrific. Obviously with the sticky draw he was a bit concerned with where he might end up, and we just left it to him and it all worked out terrifically.”

Williams’ father and record-breaking Melbourne Cup owner Lloyd Williams incredibly has enjoyed four Cox Plate seconds – two provided by the great Zipping – but is yet to take out the Australasian weight-for-age championship.

In the Feehan Stakes, Homesman was ridden to an easy victory by Ben Melham who came out positive and got a lovely trail into the race on the back of front-runner Trap For Fools.

Trap For Fools set a solid tempo in the lead, Homesman giving a kick into the straight before charging home for the dominant performance where he proved too good for his rivals that included third placed Best Of Days.

“He’s a class horse in the field,” Melham said post-win.

Williams said that this year the focus was on the Cox Plate with Homesman to follow the same spring path up until his grand final.

Williams confirmed a title defence in the 2019 Underwood Stakes on September 29 was the likely next-up option for Homesman, who is into $5 third favouritism in futures markets at Ladbrokes.com.au.

Following that, Homesman could chase atonement in the Group 1 $1 million Ladbrokes Stakes (2000m) on October 12 at Caulfield, a race he finished seventh in last Melbourne Spring Racing Carnival.

“Since we’ve had him in this time the Cox Plate’s been his aim and will be his aim and with a little luck he’ll go onto the Underwood and try and defend it and maybe on to the Caulfield Stakes and back to the mighty Valley for the Cox Plate.

“We better try and win one before they change this iconic racecourse.

“Hope he pulls up well so we can go on with a great campaign with him.”

The latest all-in Cox Plate odds at race sponsor Ladbrokes.com.au have Homesman in from $16 to $12.