Co-trainer Ben Hayes has described stable veteran Faatinah as a “sneaky chance” to win the 2019 Moir Stakes at the end of the month back at The Valley following an impressive win in Saturday’s Group 2 $200,000 McEwen Stakes (1000m). 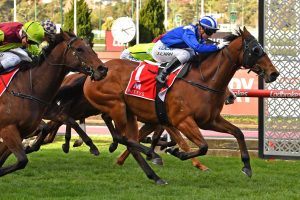 Faatinah heads towards the Group 1 Moir Stakes after winning the McEwen Stakes at The Valley. Photo: Ultimate Racing Photos.

For the second season in a row, the now seven-year-old son of Nicconi returned from an international trip to Dubai to win back in Australia first-up.

He did it last year at Moonee Valley in the Listed company over the 1000m and repeated the feat, at the same track and distance in tougher grade, this time around.

Second in the Group 2 Meydan Sprint (1000m) during a four-race Dubai raid, Faatinah was back to his brilliant best in track work at the notoriously tight Moonee Valley circuit on Monday.

He brought that excellent form to race day for a super win in the McEwen Stakes, thanks in part to a controlled ride by jockey Jamie Kah.

Kah had Faatinah settled second on the outside of the $3.70 favourite Eduardo who led along the fence.

The top fancy led into the straight before a late charge out wide from the Ciaron Maher & David Eustace-trained Bons Away.

Bons Away had the dream run and looked a winning hope, but just couldn’t quite get there as Faatinah kicked back and fended off all challenges off an on-the-speed run.

On the line the McEwen Stakes winner had a neck to spare over Bons Away, with Eduardo the same margin back for third in a blanket finish that saw only one length cover first to sixth and just three lengths from first to last (10th).

Kah managed to control the race and handle the pressure late, the Group 1 winning rider celebrating her first Group 2 victory in her maiden ride on Faatinah.

“He was so fresh.

“It was a big effort to do that first-up.

“He got into his rhythm and relaxed beautifully for me today. He gave a really good kick on the turn.

Hayes confirmed that next-up plans for the McEwen Stakes winner were a return to Moonee Valley for the Group 1 $1 million Moir Stakes (1000m).

“It was a good, strong win. Full credit to Jamie…she got him into a nice rhythm and he really found for her at the end of the race.

“He thrives off travelling and he’s a great fresh horse.

“It’s a big thrill. He’s absolutely flying this prep and off that we’ll definitely be heading to the Moir now and he’ll be a genuine chance.

“I thought he was unlucky in the race last year when caught up on the rail.

“He could be a sneaky chance in the Moir.”

It will be the third straight year Faatinah contests the Moir Stakes having run sixth behind She Will Reign in 2017 and sixth to Viddora in 2018.

The latest all-in Moir Stakes odds at Ladbrokes.com.au have Nature Strip ($4) as the favourite despite the horse running fourth behind Redzel in the beaten favourite in the Group 3 Concorde Stakes (1000m) at Sydney on Saturday.