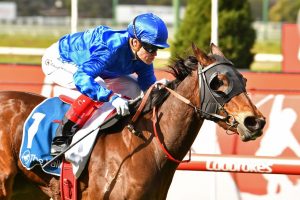 The Listed $140,000 Inglis Atlantic Jewel Stakes (1200m) has produced two Group 1 winners in the past two years with Stay With Me (2015) and Shoals (2017) both elite-level champions later in their spring preparations.

Trainer James Cummings is hoping the Atlantic Jewel Stakes results this season also prove a springboard to Group 1 success after the class win by his up-and-comer Exhilarates.

She jumped odds on at $1.95 in betting after winning the Group 3 Quezette Stakes (1100m) first-up at Caulfield on August 17 and did not disappoint.

With the blinkers on at The Valley, Exhilarates bounced out of the gates for jockey Craig Williams and was involved in a speed battle early before settling in third, stalking the leaders Taraayeff and Cheer Leader.

Williams did a masterful job in an interestingly-run race, Exhilarates putting in a terrific performance when ridden against her most favourable pattern back off the speed.

In a more forward position today, the filly got a camp on the leaders and in the end got over their heels with a stylish three-quarter length win over Sassy Salitage (2nd) thanks to her impressive turn of foot.

In third adding value to the trifecta was the fast-finishing roughie St Edward’s Crown ($31), the Bendigo-based daughter of Epaulette under a length beaten in her stakes race debut.

Exhilarates perhaps was not quite as electrifying as her big win last time out, but she was still super with last season’s Magic Millions Classic winner showing her versatility ahead of bigger spring targets.

“That’s why you found me at the front early because there’s not much pressure, everyone wants to be able to be stalking rather than making it all, so that race was a bit different at the early stages, but luckily for me I’m on the best horse.

Williams said he was intrigued to see where the Godolphin team take Exhilarates this prep, the filly a chance to extend over more distance when the blinkers came off.

“She’s lovely to ride and credit to all the Godolphin team.

“This is the first horse Godolphin started buying outside their breeding operation, and she’s been a great success for them.”

Stable representative Sean Keogh said the team were thrilled to have Exhilarates back for another stakes win and that they would get her back home before locking in a next-up race.

“She showed her class in the end,” Keogh said.

“She’s quite a casual customer…the blinkers are on really just to keep her focused.

“She was very impressive racing on speed.

“We see her finishing off lovely when she’s settling back in the field…she’s definitely electric over the shorter distances but the way she relaxed, we might be able to get a little bit further out of her.

“We’re just delighted to have this filly back and she’s been great all prep.

“She’s off the back of two black-type races now so we’ll get her home and plan out from there” Keogh said.

Should she race over further, the Group 1 $1 million Thousand Guineas (1600m) becomes an option at Caulfield on October 12 – the Atlantic Jewel – Thousand Guineas double completed by Stay With Me (2015).