The Everest Horses Face off in Concorde Stakes 2019 Field

A line-up of confirmed and potential The Everest horses will do battle at Royal Randwick on Saturday in the 2019 Concorde Stakes field including two-time defending champion Redzel. 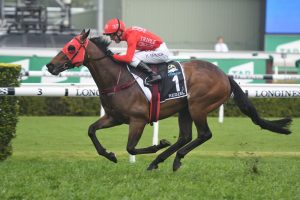 He became the race’s first two-time winner last year and is after another historical win ahead of the world’s richest race on turf – the $14 million The Everest (1200m) back at Randwick on October 19.

Redzel won the inaugural edition of The Everest race in 2017 and took out the Concorde Stakes – The Everest double again last year.

The now seven-year-old is one of eight gallopers already confirmed of a spot in the 12-horse The Everest field this season.

He was last seen running second in Eagle Farm’s Group 2 Victory Stakes (1200m) in late April and has had two recent trials including a Group & Listed win over 1000m at Rosehill on August 20.

The latest Concorde Stakes odds at Ladbrokes.com.au list Redzel as a $7 shot first-up and his record fresh is outstanding with four wins and four seconds from nine runs.

Currently Redzel is a $15 chance in futures The Everest betting, a price set to firm if he can win this weekend.

Hot favourite in Concorde Stakes betting at $2.30 and firming is the Chris Waller-trained Nature Strip in barrier two.

James McDonald rides the Nicconi five-year-old first-up on the weekend on the back of a second to Redzel in the Rosehill hit-out last month.

Nature Strip has an ultra-consistent record of 10 wins from 16 starts to date, including the Group 1 The Galaxy (1100m) in the wet at Rosehill in late March.

His last start was in Brisbane’s Group 1 Doomben 10,000 (1200m) when he ran just over a length back fourth behind The Bostonian as the beaten favourite.

He looks a huge danger fresh in the Concorde Stakes over the 1000m, Nature Strip boasting a record of five wins and a second from his seven runs over the distance.

Set to get up on the speed from the gate, the short-distance specialist will take some beating as he looks to secure one of the remaining The Everest slots.

It is a wide-open edition of the Concorde Stakes this year and a betting nightmare for any punters looking outside the favourite for value as no runner is over $7.50 to win.

Her latest run was a third behind top-rated sprinter Santa Ana Lane in the Group 1 TJ Smith Stakes (1200m) during ‘The Championships’.

Sunlight is a three-time Group 1 champ in Victoria having also beaten the boys in last year’s Coolmore Stud Stakes, but hasn’t won in Sydney since the Group 2 Magic Night Stakes (1200m) at Rosehill in March of 2018.

At $6 to retain his undefeated status with a first-up win the Concorde Stakes is the Tony Gollan-trained Zoustyle from Brisbane.

To date the son of Zoustar has won all six of his starts, but Saturday will be a career defining run for the four-year-old who makes his interstate and Group race debut.

The rails-drawn Graff – fifth in last year’s The Everest results – is an early market mover ($7.50 into $6.50), while Pierro stallion Pierata ($7.50) last seen winning the Group 1 All Aged Stakes (1400m) rounds out the field and betting markets.