There looks potential value in the Memsie Stakes 2019 odds for an Alizee win with the class mare drifting in her favouritism to win Melbourne’s first Group 1 race of the season. 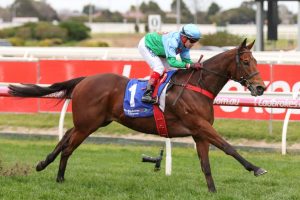 There was a massive boilover in Sydney last Saturday when elite-level racing for the 2019/20 season kicked off with Samadoubt taking out the Group 1 Winx Stakes (1400m).

This weekend the action moves south to Caulfield Racecourse for what is shaping-up as an exciting edition of the Group 1 $1 million Memsie Stakes (1400m).

There are 13 gallopers in the Memsie Stakes field and five of the hopefuls currently sit at under $10 odds in the markets at Ladbrokes.com.au.

Heading Memsie Stakes betting but on the drift out from $2.70 to $3.30 is the James Cummings-trained Group 1 Futurity Stakes winner at the track / distance, five-year-old Sepoy mare Alizee.

Drawn out wide in gate 11, she has Damien Oliver on for the first time and comes off a win as the odds-on favourite fresh at Rosehill on August 10 in the Group 2 Missile Stakes (1200m).

Despite the drift, the Bet Track at Ladbrokes.com.au still shows the mare holds the most money of any other runner in the race to win.

Alizee is out to be just the third Memsie Stakes winner since 1993 to get the job done from a double-digit gate with 20 of the 26 in that time saluting from between 1 – 6.

The big market mover though at firming Memsie Stakes odds of $5 (in from $6.50) is the back-in-form Lindsey Smith-trained Scales Of Justice.

The Not A Single Doubt seven-year-old won Perth’s Group 1 Railway Stakes (1600m) back in 2016 and is after his second elite level win at career start number 26 on Saturday.

Scales Of Justice kicked off his season with a first-up win by over three lengths at Caulfield in the Group 3 Bletchingly Stakes (1200m), which has been a decent form race for the Memsie Stakes in recent years.

He failed to salute for the punters last time out in Adelaide however when a length back second as the beaten favourite behind Dalasan in the Group 3 Spring Stakes (1200m) at Morphettville on August 17.

If successful in upsetting Alizee in the 2019 Memsie Stakes results, Scales Of Justice will become just the third winner in the past 30 years to win third-up with second-up winners boasting 13 victories in the last three decades.

Alizee’s stablemate Hartnell remains steady at $7 to win from the inside alley, followed closely by the flying Begood Toya Mother ($7.50) who is drawn the opposite end of the field out in gate 13.

Hartnell is second-up on the back of taking his prize money up over $7 million with his third place finish when only a length off the Cox Plate favourite Mystic Journey in the Group 2 P.B. Lawrence Stakes (1400m) at the track.

Begood Toya Mother meanwhile is looking to stretch his winning streak out to seven on the trot when he has his first weight-for-age run in Saturday’s Group 1 feature.

“I’d rather find out that I’m wrong by running rather than running him in the handicap and blowing them away and then Sunday morning waking up and say we should have run,” trainer Daniel Bowman said of his last start Listed Regal Roller Stakes champ.

Back your favourites in Memsie Stakes 2019 betting at the right price through Ladbrokes.com.au now, the race due to jump at 4:50pm (AEST) on Saturday.