The Godolphin stable are tipped to continue their early spring success with Cox Plate hopeful Avilius favourite first-up in the Winx Stakes 2019 in Sydney on Saturday. 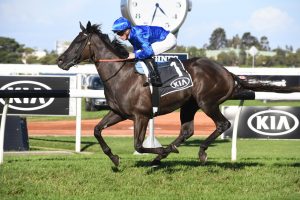 Last weekend in Melbourne the powerhouse operation enjoyed victories in both the Vain and Quezette Stakes with two of their promising three-year-olds, and now the attention turns to the return of Pivotal six-year-old Avilius.

The gun import is already a winner of over $2.4 million in prize money, which he is tipped to add to at Royal Randwick on Saturday in what is shaping-up as a star-studded edition of the Group 1 $500,000 Winx Stakes (1400m).

Avilius remains lightly-raced with 18 career starts for 10 wins including his back-to-back Rosehill Group 1 victories taking out the Ranvet – Tancred Stakes double on Heavy rated going in March by a combined 4.6 lengths.

Undefeated at Randwick with two victories from two starts at Sydney’s other premier track, Avilius is also a noted first-up performer (4:2-0-1) and looks in for a big return having saluted in a lead-up 1000m Group & Listed trial at Rosehill in early August.

His long-term spring assignment is at The Valley on October 26 in the Group 1 $5 million Ladbrokes Cox Plate (2040m) won for the past four years by the horse whose namesake race Avilius runs in this weekend – Winx (2015-18).

Currently Avilius occupies the second line of all-in Cox Plate odds at $6 and he also leads pre-field Winx Stakes betting at $3.30 this weekend.

Along with Avilius, trainer James Cummings has also nominated for Cantala Stakes winner Best Of Days and star Sepoy mare Alizee who is a likely non-acceptor.

Alizee, who Godolphin are keeping firmly in mind for their slot in the $14 million The Everest this October, returned in the Group 2 Missile Stakes (1200m) on August 10 with a narrow win as the odds-on favourite but is expected to bypass the Winx Stakes on Saturday.

For the first time in four years the Winx Stakes will be Winx-free, the heroic mare having won the event in 2016 and 2017 when it was run as the Group 2 Warwick Stakes before saluting in the event when it was boosted to elite level status and renamed in her honour last season.

Trainer Chris Waller however will still be out in force chasing a fifth straight win in the event that he also won in 2015 with Royal Descent before the Winx three-peat.

The now four-year-old daughter of Zed won her last three starts on the trot during the autumn including the Group 1 Vinery Stud Stakes (2000m) – Group 1 ATC Oaks (2400m) double.

She proved her versatility in those runs having saluted in the first on a Heavy (9) before stepping-up to the mile and a half for her dominant 1.8 length Oaks success on a Good (4) track at Randwick.

Waller’s other potential Winx Stakes runners are Unforgotten, Youngstar and Kings Will Dream.

The official Winx Stakes 2019 final field and barriers will be announced on Wednesday morning.