Waller Couldn’t Be Happier With 2019 The Everest Horses

Ace Sydney-based trainer Chris Waller said he “couldn’t be happier” with the two W.A. expats he has heading towards the $14 million The Everest this spring despite Arcadia Queen and Enticing Star missing Monday’s trials.

Waller will have two chances to take out the world’s richest turf race at Royal Randwick on October 19 with Enticing Star filling his slot in the 12-horse showdown, while he also now trains fellow Perth star Arcadia Queen who races for The Star. 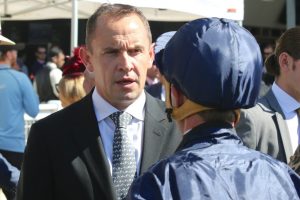 Trainer Chris Waller has a double chance to take out the $14 million The Everest race this October. Photo: Daniel Costello.

Both mares were absent from the Monday trials at Randwick, but Waller confirmed the duo were on track for their spring campaigns and actually ahead of schedule.

“I couldn’t be happier with them,” Waller told Racenet.

“I had them ready to go in case there is wet tracks and things like that. You can miss trials and the fact is our team is well ahead of schedule.

“Obviously with these horses we want to make sure they aren’t spent horses at the end of the spring.”

Pierro mare Arcadia Queen is the best fancied of Waller’s The Everest chances paying $8 for the win in early markets at Ladbrokes.com.au.

Back in Perth she has won five of her six career starts, placing third in the other, and was last seen smashing runner-up Material Man by 4.5 lengths in the Group 1 Kingston Town Classic (1800m) on December 8.

How she will go over the 1200m on The Everest in a field boasting the likes of the world’s highest-rated sprinter Santa Ana Lane and triple Group 1 winning sprint star Sunlight however remains the question.

Enticing Star is another Bob Peters-owned and bred mare that has recently joined Waller in Sydney, the six-year-old daughter of Testa Rossa paying a more generous $15 in current The Everest odds.

Lightly-raced having won eight of her 10 assignments to date, Enticing Star’s latest run was also in early December over the summer carnival in Perth when runner-up behind Voodoo Lad in the Group 1 Winterbottom Stakes (1200m).

Waller said that part of the reason both mares missed Monday’s hit-outs was to ensure they were kept fresh throughout their entire preps so a homecoming in the summer was possible.

“It would be good for (owner Bob Peters) to get them back in Perth at some stage,” he said.

“It hasn’t been the strict instruction but I don’t want to go into The Everest overdone.

“I want to be spot on and make sure they are ready for the other big races during the carnival, there is so much prizemoney on offer so we are just starting a week later.

“I haven’t pressed the button on them but they came to me from Mr Peters farm in great condition.

“It has been interesting talking to him and seeing how he runs his horses and I can see the sense and can see why he has so much success.

“His farm sent them over in great shape. We haven’t pressed the trigger yet but (Hugh Bowman) and James (McDonald) have both had a ride on them and they have been pretty happy with what they’ve felt.”

Sunlight confirmed she was on track for her 2019 The Everest bid winning the Group & Listed 900m trial on Monday.

There are still four slots to be filled in The Everest field.