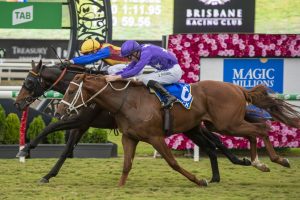 The nicely-bred Fastnet Rock colt enjoyed back-to-back wins to finish off his two-year-old campaign including his Eagle Farm Group 1 success in the J.J. Atkins (1600m) over a mile.

That victory has the galloper leading futures markets at Ladbrokes.com.au on the Group 1 $2 million Ladbrokes Caulfield Guineas (1600m) run in Melbourne on October 12.

“He hit the front and just sort of clocked off, he still had plenty under the bonnet at that point,” Cummings, speaking to Racenet this week, said of Prince Fawaz’s JJ Atkins win.

Warming up for his Caulfield Guineas preparation, Prince Fawaz has plenty to prove this season and looks very likely to do so according to Cummings who has a suitably high opinion of the untapped youngster.

“He has more than a bright future, with a Group I win under the belt already,” he said.

“He is certainly amongst the best (of the three-year-old colts and geldings) and hopefully by the end of the spring he will have proved to be the best.”

Dawn Passage is at $21 to win the Ladbrokes Caulfield Guineas 2019, first acceptances for which close on September 10.