The Lindsay Park stable are eyeing the Sir Rupert Clarke Stakes and Toorak Handicap for So Si Bon after the six-year-old’s upset win fresh in the Group 3 $160,000 Aurie’s Star Handicap (1200m) down the Flemington straight. 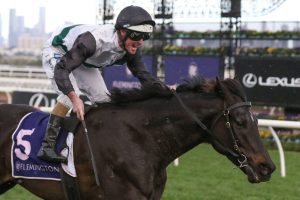 So You Think gelding So Si Bon posted just his third career win at start number 38 with the late-charging effort in the Aurie’s Star Handicap on Saturday just as the hail came down in Melbourne.

It was his 17th run at the track and his first victory at Headquarters, So Si Bon showing much improvement on his last start 20th when dead last in the Group 1 $3 million Doncaster Mile (1600m) in Sydney back in early April.

The galloper finished fourth in the Group 1 Australian Cup (2000m) when only 1.2 lengths beaten by the winner Harlem as a $31 roughie back on March 9 in his other latest Flemington run.

Malibu Style led the field around after all the runners moved to the outside fence early on, but was run down in the final furlong by So Si Bon who got out and hit the front at the 200m.

“He’s been pretty good to me,” winning hoop Nolen said.

“It’s amazing that he’s had a win.

“Onwards and upwards I think.”

Flashing home late to snare third was the beaten favourite Sesar ($4.20) who held off Seaburge and Milwaukee in a photo for the placing.

That form combined with the promising first-up success has co-trainer David Hayes confident of a big Melbourne Spring Racing Carnival campaign for the upset Aurie’s Star winner So Si Bon.

“Fantastic,” Hayes said of the win.

“We took a fresh approach and coming into the race we were quietly confident I was worried the winter form might hold up on the heavy track.

The team threw in a cheeky nomination for the horse in the Group 1 $5 million Ladbrokes Cox Plate (2040m), but admitted to having their eyes on a couple of other more achievable spring elite levels.

“He’s got pretty good form so we’ll probably head towards the Rupert Clarke and Toorak as the main aims,” Hall of Fame trainer Hayes confirmed.

Pre-field Rupert Clarke Stakes odds at Ladbrokes.com.au have So Si Bon installed at $15 post his Group 3 success on Saturday.