Odds-on favourite in the Missile Stakes 2019 Alizee was too good in the Group 2 at Rosehill, the Godolphin-raced mare holding off a late challenge from Invincible Gem to salute for the punters. 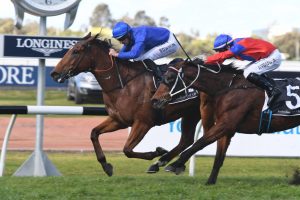 Alizee put forward her claims to fill Godolphin’s The Everest 2019 slot with a first-up win in the Missile Stakes. Photo: Steve Hart.

A three-time Group 1 winner and potential $14 million The Everest runner for the Godolphin stable this October, the James Cummings-trained Sepoy mare Alizee was all the rage in betting on the Group 2 $200,000 Missile Stakes (1200m).

Ridden by champion hoop Hugh Bowman of Winx fame, the five-year-old continued her ace record when resuming with her fourth first-up success from five runs fresh.

Last time in she took out the Group 2 Expressway Stakes (1200m) at Rosehill Gardens and was in winning form again over the same track and distance in the weight-for-age Missile Stakes, which attracted just five runners.

Two recent Sydney trials had the gun mare firing on all cylinders in her first turf triumph since the Group 1 Futurity Stakes (1400m) at Caulfield back in late February.

Bowman kept a hold on Alizee throughout the run as the race roughie Dissolute fought the front spot and led the field around.

The hot favourite was cruising during the first half of the run before improving into the race coming into the turn around the outside.

She hit the front 350m out and looked like she would win by a few lengths before the late challenge from the Kris Lees-trained Invincible Gem who won the Missile Stakes at Randwick in 2017.

“It was just a ridiculously slow pace and she had to overcome that,” winning hoop Bowman said post-win.

“The last thing I wanted to do was to be going through the field early and hitting the front at the 400 but I was given no choice.

“You can tell by looking at her…she’s still got her winter coat so I’d say there’s plenty of improvement.”

All-in Winx Stakes 2019 odds at Ladbrokes.com.au have Alizee and Le Romain at $13.