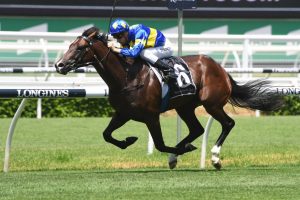 Dawn Passage shapes up as the 3YO to beat in The Rosebud on Saturday on way to the 2019 Golden Rose. Photo: Steve Hart.

Part of the Missile Stakes Day card, this year’s The Rosebud field faces off in Rosehill Race 5 at 2:15pm and features nine new season three-year-olds.

It is a wide-open affair in The Rosebud betting at Ladbrokes.com.au with the first five horses in the field under $10 for the win including the current $3.70 co-favourites Dawn Passage and Lucicello.

Dawn Passage is the early market mover having been backed in from opening The Rosebud odds of $4.50 and is currently at $18 in the futures Golden Rose betting on the $1 million feature on Saturday September 28.

Prepared by Gai Waterhouse & Adrian Bott, the Dawn Approach colt has his third career run on the weekend after a Randwick win on debut over 1000m by 3.3 lengths on Australia Day and a last start third at Warwick Farm.

That placing was behind current Golden Rose favourite Castelvecchio in the Restricted Listed Inglis Millennium (1200m) in February.

Castelvecchio went on to frank that form with a Group 2 Skyline Stakes (1200m) second, Group 1 ATC Sires’ Produce (1400m) third only a length beaten and Group 1 Champagne Stakes (1600m) win over the Randwick mile over the autumn.

It may be 26 weeks between runs now for Dawn Passage, but he has been brought on fitness wise with two winning trials in July at Rosehill and Randwick respectively and could be the one to beat fresh here with the blinkers coming on.

The danger is the in-form Lucicello chasing a third win on the trot from the outside barrier (9) with Tommy Berry booked to ride Chris Waller’s I Am Invincible filly.

The gun young grey is stepping back up into stakes’ grade after back-top-back wins this winter, the latest of which was a 2.3 length win at Rosehill over 1200m in a 2YOs handicap with Berry in the saddle on July 27.

A black-type win on Saturday will see Lucicello really enter contention for the Group 1 Golden Rose Stakes (1400m), which she currently pays $41 in pre-nomination markets to win.

“She is going as well as ever,” Waller’s racing manager Charlie Duckworth told Racenet this week.

“She galloped nicely on Tuesday and we gave Tommy Berry the option for which race [the Rosebud or a 1400m event] he thought we should run in so we had more than just one brain in the decision.

“Being drawn nine in a field of nine for the Rosebud probably isn’t the worst for her because she is still learning.

“She will go in last and be in for 30 seconds, and then probably drop out [and back] anyway.

“We will see if she is good enough over the concluding stages.”

As always, the powerhouse Godolphin stable are in the mix for The Rosebud saddling-up the James Cummings-trained Lonhro filly Athiri ($4.80) in barrier five.

She has won one of her six career starts to date with her successful debut in December of 2018 at Rosehill over 1100m.

Athiri went on to have an outstanding autumn finishing third or fourth in all five of her runs including her fourth in the Group 1 Blue Diamond Stakes (1200m) back in February.

Two lead-up trials have her fit and ready to fire, the latest producing a 1050m winning hit-out at Randwick on July 30 ahead of her much-awaited return.

“She’s had two public trials in the lead-up including an impressive trial at Randwick last week when she showed a great turn of foot over the last two furlongs,” Cummings told AAP.

“She will get a better track this weekend at Rosehill and it will be a really good place for her to kick off.

“We are pretty confident of a really good run from her first-up on Saturday.”

The other key fancies according to the bookies are the returning Peter & Paul Snowden-trained dual Group 2 winning Fastnet Rock filly Anaheed ($5.50) and the lightly-raced Let It Pour ($9.50) whose only run to date was a third to Anaheed in Randwick’s Group 2 Sweet Embrace Stakes (1200m) in early March.

Check out the complete The Rosebud 2019 field, barriers and betting markets for Rosehill Gardens on Saturday now at Ladbrokes.com.au.