Space Blues To Bring 2019 The Golden Eagle Joy for Appleby

Godolphin’s Newmarket-based English trainer Charlie Appleby could be represented in the inaugural edition of the $7.5 million The Golden Eagle in Sydney with the powerhouse stable looking at bringing over European three-year-old Space Blues. 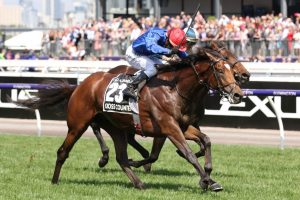 The Golden Eagle will run for the first time over 1500m at Rosehill Gardens Racecourse on November 2, the same day Melbourne’s Flemington Racecourse is host to VRC Derby Day.

The biggest race in the country for four-year-old horses, The Golden Eagle is on the radar for Appleby with his son of Dubawi Space Blues who has to date won three of his seven runs.

Space Blues will race in Australia as a four-year-old, the colt last seen running second behind Too Darn Hot in the Group 1 Prix Jean Prat (1400m) at Deauville on July 7.

That followed on from his brave second to Space Traveller when narrowly beaten as the race favourite at Royal Ascot in the Group 3 Jersey Stakes, also run over seven furlongs.

Those performances have put Space Blues in Appleby’s mind for a potential spring carnival raid down under.

“The Golden Eagle, the new race there in Sydney has been put on the radar for Space Blues,” Appleby told Sky Racing.

Pre-nomination The Golden Eagle 2019 betting at Ladbrokes.com.au already have Space Blues installed as a $15 chance.

The markets are led by the now Chris Waller-trained Arcadia Queen ($4), the daughter of Pierro last seen beating home the older horses as a filly with her 4.5 length victory in Perth’s Group 1 $1 million Kingston Town Classic (1800m).

Arcadia Queen is also one of the confirmed horses for October’s $14 million The Everest (1200m) at Royal Randwick, representing The Star.

Now worth $7.75 million in prize money, “The Race That Stops a Nation” could again be on the spring agenda for Teofilo gelding Cross Counter who subsequently won the Group 2 $2 million Dubai Gold Cup (3219m) in March of this year.

No horse has gone back-to-back in the two mile classic since the historic triple champion Makybe Diva (2003-05).

Cross Counter, who beat home fellow Europeans Marmelo (2nd) and A Prince Of Arran in last year’s Melbourne Cup results, is the early $15 favourite in Melbourne Cup betting at Ladbrokes.com.au to successfully defend his title.

Appleby expects Cross Counter to carry around 57 or 57.5kg in the Melbourne Cup handicaps for 2019 after carting just 51kg in the form of ace hoop Kerrin McEvoy to victory last spring.

“Stradivarius is what he is, he is a supreme champion,” Appleby said.

“Where do we go now, we have our eyes on the Irish St Leger [at The Curragh in mid-September] and a return to Melbourne.

“It would be a stiffer task this year, but the way he won it last year, it would be well worth it going back. That’s plan A.

“It has been something we have had in our minds and I said to a few guys the other as long as he puts in a solid performance we are going there.

“That was a solid performance and he has a racing weight in the Cup. He has definitely got stronger this year.”

Appleby also confirmed they were looking at the Melbourne Cup 2019 for the team’s Dubai Gold Cup runner-up Ispolini who is at a current quote of $26.

“We’re starting to put a few names there,” he said.

“Ispolini’s out there, he might be a horse we consider for the Melbourne Cup.”