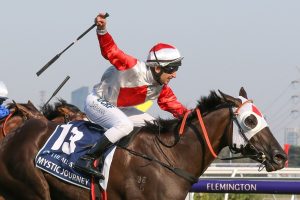 Spreyton-based trainer Adam Trinder is treading carefully in the lead-up to the Group 1 $5 million Ladbrokes Cox Plate (2040m) at The Valley on October 26 with his champion filly Mystic Journey after bypassing last weekend’s Group 3 Bletchingly Stakes (1200m) subsequently won by Scales Of Justice.

He has since confirmed the rising four-year-old’s first-up assignment will take place at Caulfield on August 17 in the Group 2 $200,000 P.B. Lawrence Stakes (1400m).

Mystic Journey however is looking unlikely to return to the same track and distance a fortnight later on August 31 for a shot at the Group 1 $1 million Memsie Stakes (1400m).

“I am really comfortable that she did bypass the Bletchingly,” Trinder told Racing Victoria on Monday.

“I thought the ground was quite testing and it wouldn’t have been a suitable start point for her.

“She’ll head to the Lawrence. That will give us more clarity as to what our next steps are.

“Unfortunately, by missing the Bletchingly, we fall into a fortnight routine with her should she run in the Memsie and then the Makybe Diva.

“So, we’ll know off the back of the Lawrence as to whether she needs to run in the Memsie. It’s a race that we may bypass, or we may diversify in travel plans with her.”

Despite being in doubt to run in the 2019 Memsie Stakes field, Mystic Journey leads all-in betting on the weight-for-age feature paying $3 for the win through Ladbrokes.com.au.

A winner of 10 of her 13 career starts to date, the brilliant daughter of Needs Further made history on March 2 when making her interstate debut.

She became the first Tasmanian-trained Group 1 winner in a century with her 2.25 length victory in the $1 million Australian Guineas (1600m) at Flemington.

Proving that victory was no fluke, Mystic Journey returned to the track two weeks later for the inaugural running of the $5 million All-Star Mile (1600m), which she easily won defeating a field of older stars including Hartnell (2nd) and Alizee (3rd).

All-in Cox Plate 2019 odds at race sponsor Ladbrokes.com.au have Mystic Journey as the $4.50 favourite ahead of Caulfield Cup top fancy Avilius ($6.50) who took out the Ranvet – Tancred Stakes double in Sydney over the autumn.