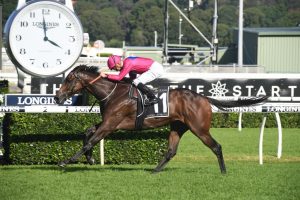 The ultra-consistent Animal Kingdom gelding finished off his autumn bid on a high, Angel Of Truth storming home in the Group 1 $2 million Australian Derby (2400m) by over three lengths as a double-figure outsider in betting.

Angel Of Truth has now won five of his eight career starts ahead of his spring return, which connections have down for September 14 at Flemington in the 2019 Makybe Diva Stakes.

Williams said there was no chance that Angel Of Truth would be seen in Sydney over the spring, meaning the galloper would not contest the inaugural edition of the $7.5 million Golden Eagle for four-year-olds.

Williams confirmed they would look to get the Derby champ into the Caulfield Cup field at a winnable weight by targeting the WFA races into the $5 million feature.

Angel Of Truth is set to run in the Caulfield Cup fourth-up following the Makybe Diva Stakes, Group 1 $750,000 Underwood Stakes (1800m) at Caulfield on September 29 and Group 1 $1 million Ladbrokes Stakes (2000m) the week before the Cup.

“We are looking at keeping his weight untouched by targeting those weight for age races so he is probably only going to get four runs,” Williams told Racenet.

“I was looking at starting him in Sydney in the George Main but with the change of dates it is out of alignment with the Caulfield Cup.

“The Golden Eagle is just too short for him.

“He is a 2000m plus horse and the lead-up races, we aren’t excited for him to win those. We just want to keep his fitness up and his weight the same for the Caulfield Cup.

“I don’t know what quality is going to be there but they are tough Group Is and some of the best going around in Melbourne.

“It is not going to be easy but when he gets to the Caulfield Cup, that’s when you will see the best of him.”

All-in Caulfield Cup 2019 betting at Ladbrokes.com.au has Angel Of Truth, to be ridden by Glen Boss over the spring, listed as a $26 chance in markets led by Godolphin’s Ranvet Stakes – Tancred Stakes double winner Avilius ($11).

“I wanted to go to the Caulfield Cup because I think he can win it,” Williams said.

“That’s why we are in the game. We want to get a horse that can carry the flag.

“It would be nice to see an Aussie horse knock over the overseas horses.”

Nominations for the Caulfield Cup 2019 close on August 29.