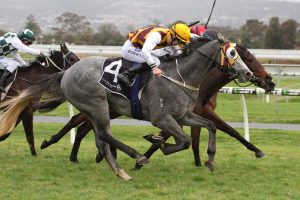 Silvera is favourite to win the 2019 Tattersall’s Mile on Queensland Cup Day in Brisbane this weekend. Photo: Jenny Barnes.

The five-year-old High Chaparral grey may be Eagle Farm-trained, but he has his first official start at the track in this Saturday’s Listed $125,000 Sky Racing Tattersall’s Mile (1600m).

Drawn a treat in barrier two with veteran hoop Jim Byrne to ride, Silvera comes off a lead-up win over the distance at Rockhampton when carrying 55kg to a 1.25 length victory on a Heavy (8) track.

That was his third win from nine starts over the mile and the drop back to 54.5kg should help this $3.30 favourite in Tattersall’s Mile odds at Ladbrokes.com.au handle the rise in class here.

There are currently four other single-figure fancies in Tattersall’s Mile betting this Queensland Winter Racing Carnival including early money coming for the market mover Magnufighter ($5 into $4.50).

Dale Smith comes aboard the Sunshine Coast-based four-year-old whose lead-up run was a third over 1350m at Doomben, under a length beaten over 1350m, only last weekend.

Saturday sees him step-up to a mile for the sixth time, the son of Magnus a three-time placegetter over the distance.

Magnufighter boasts winning form up to 2020m so will enjoy the extra meters here, the gelding fit and ready to fire on the quick turnaround.

Heading the Tattersall’s Mile weights with 59.5kg and drawn out wide is Bergerac (12 of 13), who remains one of the top fancies at $5.50 odds to make it three wins on the trot.

The classy Steve Tregea-trained five-year-old from Toowoomba has his sixth Eagle Farm start in the Listed feature on the weekend, the Drumbeats gelding chasing his first win at the course.

Bergerac improved on a lacklustre start to his winter bid when saluting in the Listed Ipswich Cup (2150m) on June 15.

He then travelled up north and enjoyed back-to-back victories with a narrow win in the MacKay Cup (2000m) last weekend with a hefty 61kg on his back, the galloper hitting the front 700m from the line and holding his rivals at bay.

“It was the way the race panned out but not many horses could do what he did,” Tregea said of the gutsy win.

Apprentice Michael Murphey rides Bergerac again on Saturday and the horse is a genuine winning hope to make it a three-peat even giving the kilos away to his rivals over the shorter distance.

Tregea has also accepted for the rails-drawn Prioritise in the Tattersall’s Mile race this winter, the Rothesay five-year-old a $15 chance having run a disappointing eighth to Bergerac in the MacKay Cup.

“He has barrier one in the Tatts Mile.

“They are both seasoned travellers and they ate up well when we went from Mackay to Rockhampton on Saturday night and then home on Monday.

“There isn’t much around for them after Saturday but you don’t want to over-tax them.”

Gold Ambition ($7.50) and Awake The Stars ($9), drawn at opposite ends of the 13-horse Tattersall’s Mile field in barriers four and 13 respectively, round out the hopes under $10 for the win.

The Michael Costa-trained Savabeel six-year-old from the Gold Coast Gold Ambition won over the Doomben mile on July 6 and has his 50th career start this weekend.

Awake The Stars also travels up from the Gold Coast for the Tattersall’s Mile 2019, the Toby Edmonds-trained Redoute’s Choice mare having run under a quarter-length second to Gold Ambition in the Class 6 at Doomben at her latest start.