Three Race Lead-Up to 2019 The Everest for Sunlight

Tony McEvoy’s star filly Sunlight is likely to contest the $14 million The Everest race fourth-up this spring when she represents Max Whitby and Neil Werrett in the world’s richest turf race on October 19. 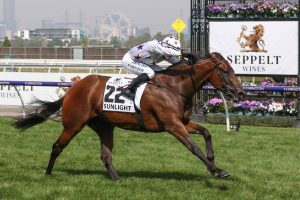 Sunlight will have three Sydney runs before contesting the $14 million The Everest race this October. Photo Credit: Ultimate Racing Photos.

The brilliant daughter of Zoustar was last seen placing third behind current 2019 The Everest favourite Santa Ana Lane in the Group 1 TJ Smith Stakes (1200m) at Randwick on April 6.

She is set to return to that track and distance looking to turn the tables on the world’s highest-rated sprinter when the rising four-year-old lines-up in The Everest field this Sydney Spring Racing Carnival.

Leading-up to The Everest her Victorian-based trainer McEvoy plans to give Sunlight three earlier runs in Sydney to have her rock-hard fit and ready to fire in the feature.

“The Sydney program fits a lot better and I can’t find a suitable race in Melbourne that I feel comfortable enough with,” McEvoy told Sky Sports Radio.

“Her history tells us the deeper into her preparation she gets, the better she gets.”

There she will be chasing her first turf triumph since she celebrated her third Group 1 success at Moonee Valley on March 22 in the William Reid Stakes (1200m).

That followed on from her three-quarter length win over Godolphin’s perennial runner-up Osborne Bulls in the Group 1 Newmarket Handicap (1200m) down the Flemington straight.

She proved her versatility the other way of running in the TJ Smith Stakes, which continued her good Sydney form from her two-year-old season when she won back-to-back Group races at Rosehill before finishing third to Estijaab in the Group 1 $3.5 million Golden Slipper Stakes (1200m).

It is a proven path into The Everest with inaugural champion Redzel (2017) winning the Concorde Stakes -The Shorts double before taking out the first ever edition of the Special Conditions race.

Last year Redzel returned and posted back-to-back The Everest victories, this time coming off a Concorde Stakes win first-up and improving on a close fifth as the beaten favourite to Santa Ana Lane in the Premiere Stakes.

Sunlight is already back in work at home at Flemington and doing everything right ahead of her spring prep as a four-year-old where jockey Luke Currie will continue associations.

“She has grown a little bit and lost all that puppy fat she had on her,” McEvoy said.

“She might have just stretched out a little bit.”

Sunlight is currently listed as a $9 fancy in futures The Everest 2019 betting at Ladbrokes.com.au.