Godolphin trainer James Cummings has indicated the flying Alizee was right in the race to represent the stable in the world’s richest turf race, the $14 million The Everest this October. 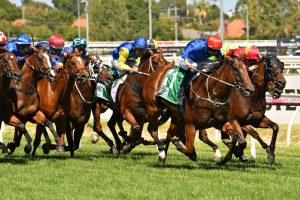 Alizee is in-line for The Everest 2019 slot held by Godolphin in this October’s $14 million feature. Photo: Ultimate Racing Photos.

The powerhouse Godolphin stable won the tender process this week to secure the final slot in the 12-horse The Everest field at Royal Randwick on October 19.

Originally Damion Flower’s Jadeskye Racing held a slot in the coveted The Everest race, however Racing NSW forced Flower to forfeit the place due to his involvement in an alleged cocaine smuggling ring.

After much speculation, it was announced that Godolphin had won the slot and now attention turns to which star galloper will represent the operation in the hugely successful spring feature.

Cummings spoke to the media about their possible The Everest contenders and named gun Sepoy mare Alizee as being one of the main chances.

The rising five-year-old has won over $2.2 million in prize money to date and is a three-time Group 1 winner after victories in the 2017 Flight Stakes, 2018 Queen Of The Turf Stakes and 2019 Futurity Stakes.

Alizee backed-up from her brilliant Futurity Stakes success, which came on the back of a first-up Group 2 Expressway Stakes (1200m) win at Rosehill by two lengths, running third behind the incredible Tasmanian filly Mystic Journey in the $5 million All-Star Mile (1600m).

Following that she went to Sydney over ‘The Championships’ and finished a luckless 17th in the Group 1 Doncaster Mile (1600m) and close sixth in the Group 1 Queen Of The Turf Stakes (1600m) over the Randwick mile.

“I’m told she’s fairly high up in the market, in the first half dozen horses capable of winning the race,” he said.

“A horse that was able to win the Expressway so nicely first-up last preparation, you would imagine if she could run well in the Missile, she’s going to get a lot of attention.

“She’s a brilliant six-furlong filly. She’s in good shape, I might trial her late next week [at Rosehill on Friday July 19].

“It’d be lovely to get on the course proper but the Missile will come around in early August and I think she will be ready to go there.”

Back to a shorter distance for The Everest, futures markets on the lucrative event list Alizee as a $13 winning hope through Ladbrokes.com.au.

“People can’t forget not so long ago Trekking walked away with the Stradbroke,” Cummings said.

“He’s the next horse coming through, not unlike [two-time The Everest champion] Redzel when he was on an upward spiral.

“And that’s not to undermine at all the efforts of Osborne Bulls who ran second in five Group Is.”

All-in The Everest odds currently have Santa Ana Lane ($5.50) at the top of betting, the world’s highest-rated sprinter representing the TAB and out to atone for a sixth in last year’s race run in the wet.