Caloundra Cup winning mare Igraine is the narrow favourite in a tight 2019 Grafton Cup betting market on the winter staying feature this Thursday. 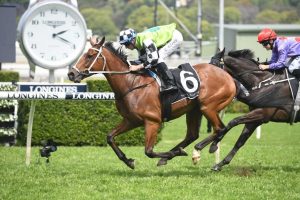 A final field of 14 gallopers take to the track in this year’s Listed $160,000 Grafton Cup (2350m), which is the Clarence River Jockey Club’s showcase race and one of the state’s leading Country Cup races.

Current $3.20 favourite in Grafton Cup betting at Ladbrokes.com.au to post back-to-back wins during her winter raid is the Robert Priscott-trained Kiwi mare Igraine.

The six-year-old daughter of Galileo is German-bred and in top form after her impressive 2.25 length success in the Listed Caloundra Cup (2400m) on June 29.

Igraine carried 54kg to victory on the Heavy (10) track at Caloundra and has to improve when going up notably in weight to 59kg at Grafton with South African hoop Robbie Fradd retaining the ride.

Equal topweight in the Grafton Cup field for 2019 is the Chris Waller-trained Exoteric, another Caloundra Cup graduate out to frank the Queensland form across the border this week.

He will benefit from meeting her equal in the kilos for the rematch and will also enjoy a firmer Soft-rated track as opposed to the mud course at the sunshine coast last time out.

Exoteric is the $5.50 second favourite in the Grafton Cup odds and is at an equal price with the consistent Ciaron Maher & David Eustace-trained Sebring mare Sopressa.

Four-year-old Sopressa was runner-up in the Caloundra Cup and goes up from 54kg that run to 56.5kg on Thursday as she chases her first win over further than 2000m.

In a tight top half of the markets the other best fancied Grafton Cup hopeful is the market mover He Ekscels ($6.50 into $6) chasing a third straight win.

The Richard Laming-trained Ekraar gelding saluted in a Benchmark 78 over 2100m at Echuca before backing up at Rosehill on June 29 to take out the Kensei Handicap (2000m) on a Heavy (9) track.

Despite the good form, He Ekscels will need to bring his best to Grafton as he rises notably from 51kg last time out to 55kg in the Listed feature.

Other quality chances in the Grafton Cup this week include Waller’s other shot at his first success in the feature Vaucluse Bay ($10), last start winner Happy Go Plucky ($10) and the in-form No Money No Honey ($12).

Al Maher five-year-old Vaucluse Bay was runner-up in the Gold Coast Cup (2400m) in early May before his ninth in the Listed GH Mumm Stakes (1820m) on June 22 in Brisbane.

That lead-up run at Eagle Farm was better than it reads with Waller’s runner under two lengths beaten as a roughie hope on an unsuitably firm track and the horse is yet to finish out of the money in four runs over the Grafton Cup distance.

Happy Go Plucky represents Gold Coast horseman John Gilmore and is out to frank the Grafton form having won the Cup Prelude (2200m) on June 30 by nearly two lengths carrying a hefty 61kg.

He comes right back to 54kg in the big one with experienced jockey Jim Byrne taking over for Ryan Plumb in the saddle.

No Money No Honey could also surprise, the six-year-old Host mare under a quarter-length beaten last time out at Randwick’s Kensington track over 2400m on a Heavy (10) course.

The rails-run meanwhile belongs to Sacred Day ($12) who is after back-to-back wins following the Tony Pike-trained NZ raider’s Benchmark 65 win with 59kg at Doomben last month.

The Grafton Cup 2019 runs as Race 7 at 4:05pm on Thursday with markets now open at Ladbrokes.com.au.