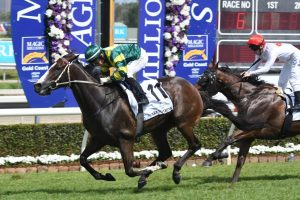 Care To Think is favourite to return to winning form in the 2019 Ramornie Handicap on Wednesday. Photo: Steve Hart.

Always a popular winter sprint, this year’s Listed $160,000 Ramornie Handicap (1200m) will run at a capacity 16 starters with the first three emergencies already gaining a start due to a number of early scratchings.

Set to carry the 59kg topweight from gate six with veteran hoop Jim Byrne in the saddle is So You Think five-year-old from Murwillumbah Care To Think.

The gelding chases his first victory since the Gold Coast’s Magic Millions Cup back in January of 2018 so is out to break a notable winning drought.

Back from his lengthy let-up, the galloper comes off two eye-catching trials and looks well-suited to the Soft-rated Grafton track.

Fresh over the 1200m Care To Think is a genuine chance to atone and heads the latest Ramornie Handicap odds at Ladbrokes.com.au paying $3.90.

Despite the capacity field just two other horses are under double-figures in the Ramornie Handicap betting for 2019 with early market mover Haunted ($4.60) and the widely-drawn Whypeeo ($9).

Money is coming for the James Cummings-trained Godolphin galloper, Lonhro four-year-old Haunted, who has strong form over the distance (5:2-0-0).

Like Care To Think this gelding is looking for atonement after failing to fire last time out finishing second last (9th) at Flemington in the Listed Straight Six (1200m) back in late May.

Haunted is better on Soft going, which he will get on Wednesday, and will drop in weight with the in-form Rachel King booked for the ride.

Whypeeo has also had early support for the punters backed in from double-figures, the well-bred Toby Edmonds-trained I Am Invincible four-year-old traveling from the Gold Coast.

His winter form has been hit and miss, but his lead-up run was strong when under a length beaten for third over this distance at Doomben on just last Saturday.

On the very quick back-up, Whypeeo is fit and firing and has the pace to challenge at Grafton.

Veteran seven-year-old Top Striker has his 42nd career start this week, the evergreen galloper racing at Grafton for the first time on Wednesday following a nice lead-up win over 1100m on a Heavy (9) Rosehill track on June 29.

Smartypy for former top jockey turned trainer Chris Munce also shapes up as a nice Each Way shot in the Ramornie.

The Brisbane-trained Smart Missile mare has been ultra-consistent throughout her entire autumn – winter campaign.

Two back she finished third as a roughie hope at Doomben in the Listed Helen Coughlan Stakes (1200m) before a fighting win over Ef Troop at Ipswich over the 1200m on June 15.

Star Boy meanwhile chases a third win on the trot and his fourth win from five starts.

The Brett Cavanough-trained Pluck four-year-old from Scone last seen saluting at Tamworth in a Benchmark 86 carrying 58.5kg and so will relish coming back to the 54kg minimum here as he rises in grade.

The Ramornie Handicap 2019 is scheduled as Grafton Race 7 at 4:00pm on Wednesday ahead of the Clarence River Jockey Club’s Grafton Cup Day on Thursday.