The punters shied away from her late but David Vandyke’s class filly Baccarat Baby proved her class and toughness with a runaway win in the Sunshine Coast Guineas race famously won by Winx in 2015. 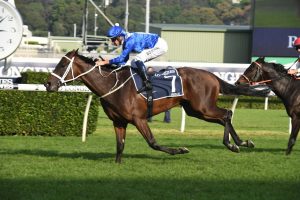 For the 2019 edition of the $140,000 Sunshine Coast Guineas (1600m) the three-year-olds had to work hard on a Heavy (10) Caloundra track, but it took none of the shine off Casino Prince filly Baccarat Baby.

One of the star up-and-comers over the Queensland Winter Racing Carnival, including her second in the Group 2 Queensland Guineas (1600m) on Stradbroke Day, the bay filly raced in last Saturday’s Group 1 Tatt’s Tiara (1400m).

Getting a start in the elite level as the first emergency, she had excuses when finishing just under four lengths back 14th against the older mares from a wide barrier (16 of 18).

Original plans by her Sunshine Coast-based trainer Vandyke were to head to the paddock ahead of a possible spring return.

On Monday however Vandyke opted to press onto Caloundra Cup Day with the bonny filly and it proved a winning move.

“I’ve had better horses but none tougher,” Vandyke said post-win.

“She’s been in work since November.

“She’s had such a great preparation….I couldn’t have asked any more from her.

Jockey Micheal Hellyer continued his successful association with Baccarat Baby in the Sunshine Coast Guineas where the one-time favourite was forced to race three wide without cover on the rain-affected track.

She relaxed midrace and Hellyer let her get into her groove as she switched off before running away from her rivals late for a very deserving win.

“It was testing,” Vandyke said.

“She had a hard run and she just kept finding. When she went out on the track…I said ‘this is the best she’s ever been’.

“She really wanted to be here today.”

The Ciaron Maher & David Eustace-trained Reset colt Junipal jumped favourite and was brave in defeat only getting going late to run three lengths back second.

In third to round out the Sunshine Coast Guineas trifecta was Peter & Paul Snowden’s roughie-priced Mossman filly Zavance who looked the winner on the straight before getting run down in the closing stages.

Vandyke confirmed he would definitely be sending Baccarat Baby out for a well-earned spell now.

The future looks good for her too with history on her side – three of the past four Sunshine Coast Guineas winners continuing on to win at least one Group 1 race.

To back Baccarat Baby next race and access all the top upcoming horse racing odds and offers visit Ladbrokes.com.au.