An outstanding second in last weekend’s Ipswich Cup has consistent Kiwi stayer Sampson on track for a quick back-up into the Tattersall’s Cup 2019 at Eagle Farm this weekend. 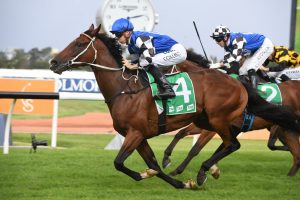 Big Duke is nominated for a run in the 2019 Tattersall’s Cup at Eagle Farm this weekend. Photo: Steve Hart.

The final Group 1 race meeting of the 2018-19 racing season takes place in Brisbane on Saturday with Tattersall’s Tiara Day featuring a triple-shot of Group events.

One of the key support acts on the card is the Group 3 $200,000 Lazy Yak Tattersall’s Cup (3000m) that attracted seventeen early entries at nomination stage on Monday.

Among the standout nominees is the Howard Mathews-trained Sampson, a rising 10-year-old who will be lining-up for his 70th career start in the Tattersall’s Cup.

Last Saturday the evergreen Dubai Destination gelding showed he still had plenty left in the tank when carrying topweight from the outside gate to place second behind Bergerac in the Listed $180,000 Ipswich Cup (2150m).

It was the exact run Otaki-based horseman Mathews needed to see to press onto the Group 3 on Tiara Day.

“He is loving it over here as it is like being at home in the summer,” Mathews told AAP this week.

“It is normally around 27 degrees and he has blossomed.

“He has certainly paid his way and there are numerous other opportunities for him that are coming up over the next few weeks.

“He looks an excellent chance in the Tatt’s Cup this weekend as the 3000 metres will be perfect for him while there is also the option of the Caloundra Cup [2400m] a week later if he pulled up all right.

“A month later there is the Queensland Cup [3200m] at Eagle Farm again so we are a little spoiled for choice if he can maintain his form and the handicapper treats him well.”

There is only one last-start winner among the Tattersall’s Cup nominations this Queensland Winter Racing Carnival with the Desleigh Forster-trained Real Saga four-year-old It Ain’t All Honey.

That solid one length effort could see It Ain’t All Honey given the chance at back-to-back wins on successive Saturdays stepping up to the gruelling 3000m.

Second and third over the line in the same lead-up race at Ipswich – Travistee and Tucano – have also been entered for a possible rematch in the Tattersall’s Cup race in Brisbane.

Saturday will mark her black-type race debut and her first outing to Eagle Farm.

Irish-bred Tucano is also Sunshine Coast-trained and racing at Eagle Farm for the first time if accepted into this year’s Tattersall’s Cup field.

The eight-year-old Monsun stallion jumped a $71 roughie at Ipswich last Saturday and raced out of his skin for the top three finish, the former French-raced galloper as yet untested in Group class.

Other notable Tatt’s Cup nominees this season include the Kris Lees-trained Big Duke coming off a third in the Brisbane Cup and Grahame Begg’s fifth-placed mare out of the same Group 2 Our Libretto.

The official Tattersall’s Cup field, barriers and betting markets at Ladbrokes.com.au are due for release on Wednesday.