In-form three-year-old Baccarat Baby is one of eight fillies nominated to take on the older mares in Saturday’s Tatt’s Tiara 2019 in Brisbane but is needing a high attrition rate to gain a start in the season’s final Group 1 race. 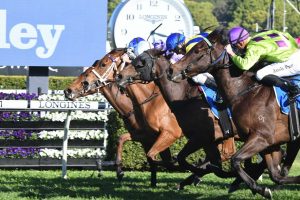 Eagle Farm Racecourse hosts the Group 1 $500,000 Tattersall’s Tiara (1400m) this weekend to round out elite level racing for the 2018-19 racing season and the feature event has attracted thirty-three nominations.

With a host of other entries boasting bigger race wins and more prize money than Casino Prince bay Baccarat Baby ($296,650), her Sunshine Coast-based trainer David Vandyke has his fingers-crossed but remains realistic about his filly’s chances of making the starting line-up.

“She is going terrific but we just have to hope she makes it,” he told Racenet this week.

“There is plenty of nom’s and there’s a few horses there that have won more than her.

“We think she deserves to be there but time will tell if she actually makes the field.”

Should Baccarat Baby get into the Tattersall’s Tiara field on Saturday, Vandyke believes she’s been showing the right kind of form to be very competitive.

“She has been very impressive her last two runs at big odds,” he said.

“She has franked the form when she went down to Sydney and only just got beat in the Flight Stakes when held up late in that race.”

A winner of six of her thirteen career starts to date, Baccarat Baby was under a length back finishing fifth behind Oohood in Randwick’s Group 1 Flight Stakes (1600m) as a $26 shot last September.

She kicked off her campaign this April with a first-up win in the wet at home over the mile, before a fourth to subsequent Queensland Oaks champion Winning Ways in the Listed Gold Coast Bracelet (1800m).

The filly then took on the boys when runner-up at blowout odds from barrier 17 of 17 in the Group 3 Fred Best Classic (1400m) on May 25 and second at double-figures again behind Kolding in the Group 2 Queensland Guineas (1600m) on Stradbroke Day.

Vandyke is confident that the drop-back in distance for the Tiara would also work in favour of his up-and-comer.

“I tried to step her out to 1800m but I don’t think she really got it but the good thing about Saturday is being a quality field of Group I performers, there will be good pace over the 1400m,” he said.

“She begins well herself so she should be able to find a good position right behind the speed.

“She finished off strongly at her last start so back to the 1400m looks ideal.”

Plan B for Baccarat Baby is a return home on Caloundra Cup Day Saturday week for the Group 3 $140,000 Sunshine Coast Guineas (1600m).

“It’s our major home track meeting of the year so it will be a nice consolation to go back and have her running around there at probably a short quote if she doesn’t get a run,” Vandyke said.

The Tatt’s Tiara field has an 18-starter capacity and the 2019 entries include the likes of Chris Waller’s defending champion Prompt Response – who won last year when trained by Gai Waterhouse & Adrian Bott – along with her dual Dane Ripper Stakes winning stablemate Invincibella.

Current all-in Tattersall’s Tiara odds at Ladbrokes.com.au list Baccarat Baby as a $15 chance to run and win the weight-for-age clash.

Those pre-field Tattersall’s Tiara betting markets are led by Savatiano at $5, the James Cummings-trained four-year-old having won the Group 3 Glenlogan Park Stakes at the track last time out by 2.75 lengths.