The Steve Tregea-trained Bergerac held off a late charge by proven stayer Sampson to salute in the Ipswich Cup 2019 results despite never having been tested over further than a mile. 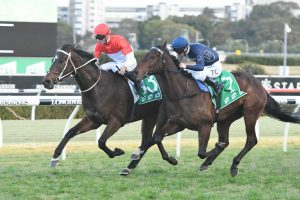 Bergerac (pictured at Randwick) won the 2019 Ipswich Cup in his first run over further than a mile. Photo: Steve Hart.

In a lovely return to form the five-year-old Drumbeats gelding from Toowoomba atoned for his luckless ninth in the Listed Wayne Wilson (1600m) at Eagle Farm last Saturday to take out top prize in the Listed $175,000 Channel Seven Ipswich Cup (2150m).

Tregea was confident the Windemere Stud bred and raced galloper would get the distance and that confidence was rewarded with a one length victory over the brave Howard Mathews-trained runner-up Sampson.

Sampson is now set for a seven day turnaround heading to Brisbane on Tattersall’s Tiara Day for the Group 3 $200,000 Tattersall’s Cup (3000m).

Bergerac meanwhile targets the $150,000 Rockhampton Cup (1600m) dropping back down in distance again on July 6.

Apprentice Michael Murphy reunited with Bergerac in the Ipswich Cup having been replaced in the saddle the Saturday prior by Brad Stewart.

“He certainly got the trip,” Murphy said.

“I just got going at the right spot and away he went.

“He does back-up very well and obviously he was just too good today.”

Murphy followed instructions from Tregea to a tee and pulled off the perfect result, charging to the line after finding another gear over the final furlong.

“He’s a horse that’s great following the rail on these tighter tracks,” Tregea said after the victory.

“I just said to Michael ‘don’t lead all the way but just be in front when you get to the post the first time’ so he did exactly that and gave him a lovely ride so it all worked out beautifully.”

The hard luck story in the Ipswich Cup was one-time favourite Fighting Teo, the four-year-old nearly falling after getting his heels clipped before balancing up to run a very brave third.

To back the Ipswich Cup winner Bergerac next race at the best winter racing odds online visit Ladbrokes.com.au today.