Brisbane horseman Chris Anderson is ecstatic to saddle-up he and Robert Heathcote’s first Group 1 runner as a training duo on Saturday, confident the 1600m will suit their smart two-year-old Ballistic Boy in the 2019 J.J. Atkins Plate. 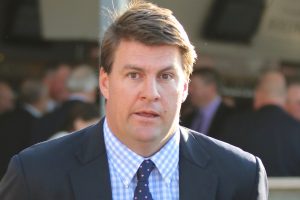 Current all-in J.J. Atkins odds at Ladbrokes.com.au list the youngster, who has won one of his three starts to date, as a $26 outsider in markets led by the gun Anthony Cummings-trained Prince Fawaz.

After winning a two-year-old maiden race on debut over 1200m at Doomben back in mid-March as the odds-on favourite, Ballistic Boy finished a game eighth when 4.4 lengths off the winner Dubious back at the track two months later as a $41 outsider in the Group 2 Champagne Classic (1200m).

He was last seen jumping at $151 odds at Eagle Farm on May 25 in the Group 2 $400,000 BRC Sires’ Produce Stakes (1400m) finishing less than three lengths back fifth to Strasbourg in an encouraging performance.

Anderson is now confident Ballistic Boy can perform better than his J.J. Atkins price suggests once again, especially getting out over the mile for the first time in the set weights classic.

“We can hardly wait to get him out to 1600 metres,” Anderson, who joined forces with Heathcote on May 1, told AAP this week.

“The big fella did a really good job in the Sires and we have been saying all along he will be nice horse over some ground.

“Ballistic Boy is safely in the field for the Atkins so it has been all go.”

“He was one of several horses bought by the late Dato Tan Chin Nam’s Think Big Stud to race in Queensland,” Anderson said.

Anderson and Heathcote have already celebrated six winners together in just over a month.

The incredible success of the great Buffering, a seven-time Group 1 winner, has Heathcote second on the all-time list of Group 1 winning trainers in Queensland with 11 victories at the top level.

Anderson is hoping he can be a part of the 12th this weekend in an upset J.J. Atkins result.

It is a tight first-half of the market for this winter’s J.J. Atkins with Prince Fawaz ($4) narrowly ahead of the Chris Waller-trained Reloaded ($4.40), his in-form stablemate Accession ($4.60) and Peter & Paul Snowden’s BRC Sires’ winner Strasbourg ($5).

Check out the latest Group 1 racing odds for Brisbane this weekend now through Ladbrokes.com.au.