Ciaron Maher came away victorious in the Group 2 Champagne Classic (1200m) at Doomben on Saturday as speedy two-year-old colt Dubious put forward his claims ahead of next month’s Group 1 J.J. Atkins Plate.

The colt by Not A Single Doubt was installed as the favourite in the lead up to the race and did not disappoint storming home to win by a length. Jockey James McDonald weaved his way through traffic coming down the straight to establish a position one-off the rail, quickening on the outside of Strasbourg – who went on to finish in a dead heat for second alongside Czarson. 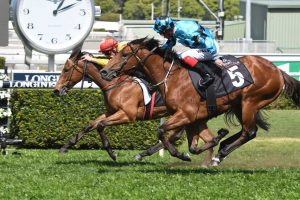 Dubious was third-up on debut at Doomben and now has sights set on the $600,000 J.J. Atkins Plate on June 8 at Eagle Farm. Maher remained hush on whether he was a certainty, but credited McDonald for a job well done.

“We’ll have a think; it’ll be interesting to see what James thinks when he comes back in but I’d be certainly willing to roll the dice” Maher said when asked on the Atkins.

“Beautiful ride, as I said before the race, a little bit vulnerable today. He hadn’t had a run for a while and he’s quite round, but James McDonald, it was a beautiful ride, just had him there, got the split, waited and quickened up nice.”

Saturday marked Dubious’ first Group 2 win after placing third in the Todman back in March. The decision to take the blinkers off seemed to do the trick, as the promising youngster has now won three from six starts in his lightly raced career.

“What a dude of a colt, he’s very push button, when he came around the corner it was just a matter of getting the right splits at the right time and he managed to do that” McDonald said after the race.

“He’s a great moving, great mind, he’s got a good turn of foot. He ticks a lot of boxes.”