Tony Pike came away victorious in the Group 1 Doomben Cup (1200m) on Saturday as 40-1 chance The Bostonian saluted for punters at a pretty price.

The four-year-old New Zealand import bolted home along the rails to win a nail-biting photo finish over second-elect Osborne Bulls. Jockey Michael Cahill remained patient up until the final furlong, flicking the switch to blaze home in a time of 1:08.97 seconds.

“My horse began well, I expected to be in the first four or five and he was there in that position travelling quite strongly,” Cahill told Channel 7 after the race.

“I just needed a bit of an opening to come his way and it did eventually, he’s very powerful to the line, he’s a really good horse. 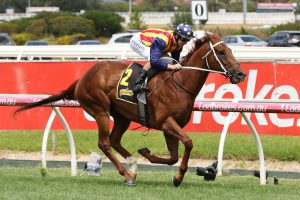 Nature Strip, above, failed to fire during his Queensland debut at Doomben on Saturday. Photo Credit: Steve Hart.

“I had good success on him here last winter he was unbeaten through the Queensland Carnival, he raced well in New Zealand and their big sprints, and he raced well here today.”

Cahill has plenty of experience at Doomben, having won the 10,000 way back in 2001 aboard two-time winner Falvelon.

There was no such luck for Nature Strip, however, as the $2.30 favourite was swallowed up down the straight to finish fourth. After winning the Group 1 Galaxy back in March, it was a disappointing result with many questioning whether the earmuffs played a factor.

Osborne Bulls wasn’t disgraced running second, but it was another frustrating result for Godolphin having placed runner-up in two previous Group 1 starts this prep.

The five-year-old gelding raced with the blinkers on for the first time on Saturday, but a slow start from the barriers ultimately cost trainer James Cummings.

As for The Bostonian, the Doomben 10,000 is often an ideal leadup race to the Group 1 Stradbroke Handicap held at Eagle Farm on June 8.

“Tony will have a good talk with David Arche the owner, possibly just straight to the Stradbroke now,” a foreman for Pike said after the race.

The Bostonian has been installed as a $15.00 chance for the Stradbroke, while Osborne Bulls remains the $5.00 favourite.