The heavy track proved no problem for the Gwenda Markwell trained Angel Of Truth on Saturday, leading from barrier to box to win the Group 2 Tulloch Stakes (2000m) on the way to next week’s Group 1 Australian Derby (2400m).

It was a leaders track at Rosehill in the slippery conditions which proved favourable for the inside runners. Angel of Truth dictated the pace with jockey Corey Brown on board, but the three-year-old’s explosive turn of foot down the straight proved to be the real eye-catcher. 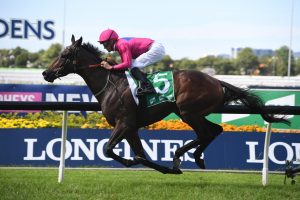 Angel of Truth now looks to back up in next week’s Australian Derby at Randwick. Photo Credit: Steve Hart.

Madison County, who was the $3.20 favourite heading into the race, moved to an outside position on the bend to quicken down the straight. The Murray Baker trained three-year-old looked to have the race won after swooping in late, but struggled with the heavy conditions as Angel of Truth kicked on.

The win marked Angel of Truth’s second win of the year after winning at Kembla Grange over a mile back in February. The Animal Kingdom gelding has since firmed from $51.00 into $26.00 for next week’s Australian Derby, a race Markwell intends to target.

“I think he will, we’ll talk to the owner and see how he pulls up. We’ve had one try and that horse ran away from me, so I’m back for another try” Markwell said.

Angel of Truth presented fit and forward in the mounting yard, good news as he looks to make his Group 1 debut next week.

“He’s certainly toughed it out, he cantered to the front and kept going” Markwell said after Saturday’s win.

“I think he will, we’ll talk to the owner and see how he pulls up. We’ve had one try and that horse ran away from me, so I’m back for another try.”