Trapeze Artist led from start to finish to record an absolutely dominant victory in the 2019 Canterbury Stakes at Royal Randwick this afternoon. 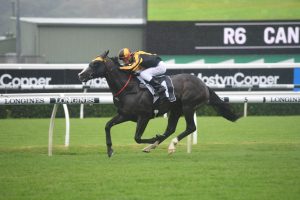 Trapeze Artist led from start to finish to win the 2019 Canterbury Stakes at Royal Randwick. Photo by: Steve Hart

Blake Shinn took Trapeze Artist straight to the front in the early stages of the Canterbury Stakes and he never really looked like getting beaten.

Trapeze Artist kicked clear at the top of the straight and it was clear that the race was over a long way from home as the Snitzel entire absolutely bolted in to win in a track record time.

The Canterbury Stakes win of Trapeze Artist capped off an excellent training performance from Gerald Ryan, who gave the four-year-old a pair of barrier trials following his flat effort in the Expressway Stakes.

Ryan was delighted to see Trapeze Artist return to winning form and he confirmed that the stallion prospect will press on to the TJ Smith Stakes at Royal Randwick during The Championships and the All Aged Stakes.

“We’ve got two more to go – the TJ and the All Aged and we’ll see what happens.”

“With Blake riding him in the two trials then the way the field was made up today we were going to be a little positive on him, not necessarily lead.

“With the map we didn’t know where we’d end up, he said he’d just take his time until the half mile and then work it out from there.

Trapeze Artist’s regular jockey Tye Angland was confirmed as a quadriplegic as a result of injuries he suffered in a fall in Hong Kong and new jockey Blake Shinn was clearly emotional to win the Canterbury Stakes on a galloper that he called ‘Tye’s horse’.

“All the jockeys in this race are riding for Tye,” Shinn said.

“He’s on track and this is his horse.

“It’s pretty emotional really to be given the opportunity.

“It could’ve been me in Tye’s position, having a fall and breaking my neck.

“My heart goes out to him and I’m very honoured to be able to ride this horse and ride in these silks in support of Tye.

“A sensational win on a superstar horse.”

“Once I got to the front and I had control I was never in doubt.

“It was a tricky race to assess but I said to (owner) Bert and (trainer) Gerald, ‘look we’ll just ride the horse, play to his strengths.’

“He doesn’t like a sit-sprint so we made it a bit of a test.

“How are they going to beat him?

“On his best he’s up there with the world’s best sprinters and he proved that today.”

“After his last run you may have been a bit unsure where he was at but he always takes a run to get fit.

“I knew when I trialled him and worked him that he was on the money.

“I knew he’d come here today and perform to his best and he’s going to improve again into the TJ Smith.”

Shoals found the line nicely in the concluding stages to record another Group 1 placing and it was Prompt Response that surprised the likes of Pierata and Kementari to finish third.