Bowman: Winx Relaxed and Strong Ahead of Chipping Norton

The seven-year-old is second-up following last fortnight’s all too easy win in the Apollo Stakes, tasked with taking on six fellow stablemates in the seven horse field. Jockey Hugh Bowman and trainer Chris Waller spoke to the media on Thursday morning, addressing Winx’s condition following a midweek jumpout at Rosehill.

“She’s probably better to be perfectly honest, she’s a little more relaxed as I pointed out heading into the first run, which to me is a very good sign,” Bowman said when asked on Winx’s condition. 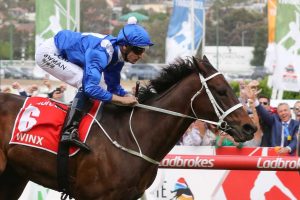 “As I pointed out, she’s a little stronger this morning and those competitive juices are certainly flowing through her veins,”.

Well on her way to April’s Queen Elizabeth Stakes (2000m) – a race that could be Winx’s final swansong on the track – Waller can rest easy knowing she won last year’s Chipping Norton by a comfortable seven lengths.

The champion trainer remains firmly focused on the future, but admits he doesn’t spend a lot of time thinking about Winx’s growing list of accolades.

“When she hits the front in the race and you can see that dominance, you get a big sense of relief and you also get that sense of satisfaction to say ‘wow, how privileged are we to be working with this horse.”

The plan on Saturday will be no different to what we’ve seen in her 22-straight Group 1 victories. Bowman shied away from discussing his plan for the Chipping Norton, teasing racing fans everywhere by suggesting Winx might sit up on speed.

“She could, she never has. We sat outside the leader in the Warwick Stakes I believe, but we’ll work that out as we go” Bowman said.

“If they go too slow they’ll have an awful job of out-sprinting her won’t they.”