It didn’t take long for Godolphin to gain the upper-hand at Randwick on Saturday as promising young filly Tenley claimed the $150,000 Pierro Plate (1100m) for the blue colours.

James Cummings’ speedy two-year-old got off to a horror start from the wide draw to sit dead last at the final turn, but while co-favourite Fiery Red and All Cylinders battled up front, Tenley swooped in from the outside in a brilliant piece of riding from jockey Kerrin McEvoy. 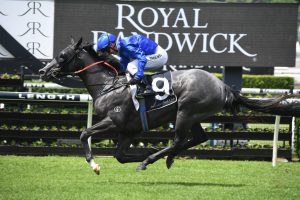 Tenley has firmed onto the third line of betting ahead of next month’s Golden Slipper at Rosehill. Photo Credit: Steve Hart.

“James had always liked her, and she put them away nicely in her maiden, and she’s come from the back again today” McEvoy said after the race.

Tenley, who won on debut at Kensington over 1100m back in November, came in at $11.00 odds prior to Saturday’s race. Blinkers on proved the trick, but the same can’t be said for Covert Ops – the $4.20 chance enjoyed no such luck finishing 10th.

“I must say she’s impressed with the way she’s done it, blinkers on. She did’t step back from the barrier again, I was worried we were too far back, but she ended up having a really strong finish, she’s a smart filly” McEvoy went on to say.

“Getting up into this kind of grade with the two-year-old’s, you’ve got to have that little bit of zest about you and she proved it today” Beadman said.

“Let her find her feet for the first couple of furlongs and when Chris’ (Waller) other filly went a bit sideways at the corner she got a nice run through. She’s a real quality filly, and I think there’s bigger things in-store for her.”

Tenley joins fellow Godolphin stablemate Tassort as another of Sheikh Mohammad’s chances in the Golden Slipper. Tassort is the current favourite at $5.00 after winning last month’s Golden Gift (1100m) at Rosehill, but McEvoy still feels confident after Tenley’s strong showing on Saturday.

“This is the right time of year for a smart filly to improve and that’s what she is, she’s given me a quality feel the way she’s turned out, exciting future for her.”