Weir Set to Swarm on Ballarat Cup With Host of Runners

Weir has called Ballarat home since his career hit the ground running in 2001, and with just one winner to his name  (Just The Part in 2001) Victoria’s leading trainer thinks he’s a chance at another victory on Saturday. 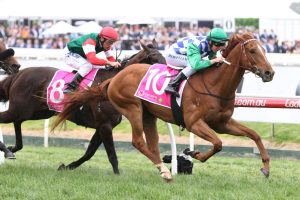 Kiwia, above, looks to back up in this weekend’s Ballarat Cup. Photo Credit: Ultimate Racing Photos.

“I think Kiwia and Tradesman, they both ran at Sandown on Saturday and both pulled up well” Weir told RSN on Monday morning.

“Kawia was a bit unlucky, Master Zephyr, Another Coldie, they are the sort of horses heading there” Weir went on to say.

Kiwia finished fifth in the Group 3 Eclipse Stakes (1800m) at the weekend after opening at $10 odds with Ladbrokes.

The five-year old gelding will step up to the 2200m distance for the first time this prep, but has won comfortably over 2000m before which includes a win in the Group 3 Coongy Cup at Caulfield last year.

Tradesman looked a little worse for wear in the Eclipse Stakes finishing seventh in the nine horse field. The seven-year old veteran has never won at Group level, but did capture the Ipswich Cup (2150m) earlier in June.

Perhaps Weir’s most promising chance however, is Master Zephyr.

The British import ran home strongly to finish third in the Ararat Cup (2000m) two week’s ago, and has run no worse than fifth in his last four starts over 2000m.