Make it two wins from two for Extra Brut at Flemington. 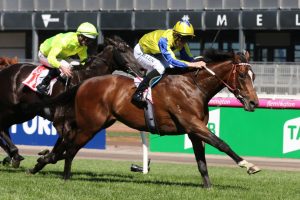 Darren Weir has won just about everything there is to win in racing, but the Victoria Derby eluded the champion trainer prior to Saturday’s Group 1 win from Extra Brut.

The three-year old stormed home down the outside part of the track to claim the $1.2 million prize-money, proving too good over the 2500m journey to beat home $3.60 second-elect Stars of Carrum over the final furlong.

“He showed you what class of rider he is, I don’t have to speak about him anymore” Weir said of winning jockey John Allen.

Extra Brut firmed from $14 into $11 just minutes before the jump. The colt out of Domesday looked no chance caught four-wide at the tail of the field on the final turn, but found some clean air down the straight to run home solidly.

“We got on the back of the Godolphin horse early, which is always a good horse to race into the race, he was gone at the 600, and had to peel off his back” Allen said following the win.

After the betting was dominated by $3.10 favourite Thinkin’ Big all week, Gai Waterhouse’s hopeful looked to be in a good position alongside Farooq at the 1200m mark, but struggled in a packed field down the straight to finish 12th.

Last start Moonee Valley Vase winner Stars of Carrum ran home nicely, with the son of Fiorente showing the same turn of foot that was on display last week to run second.

As far as Weir is concerned though, Allen was simply a class above.

“They all work hard at home, but he probably works extra hard. He’s there everyday doing the track work, and helping us out, it’s great for him to be a part of it” Weir said after the race.

Extra Brut ran a time of 2 minutes 34.31 seconds, just one second shy of the course record.