It’s been a big 24 hours for this years Melbourne Cup favourite.

Following a controversial name reversal from Yucatan Ire to his original name of Yucatan, this years $4.50 hopeful then went on to gallop successfully at Werribee a week out from next Tuesday’s $7.5 million feature. 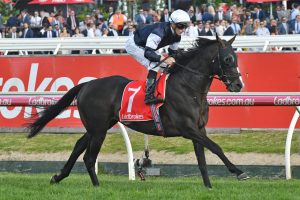 Aidan O’Brien’s five-year old won the Group 2 Herbert Power Stakes (2400m) at Caulfield last start after being caught deep and forced to run forward. Admittedly, O’Brien’s leading foreman T.J. Comerford said Yucatan pulled up sore after the run, but is in great shape ahead of the Cup.

“He was a little bit sore after he ran the first day, and now he’s bounced back lovely, and his head is good and he’s in a good place” Comerford told Racing.com.

Yucatan jumped alongside fellow stablemate The Cliffsofmoher on Tuesday, who currently sits fourth on the Cup ballot. The son of Galileo is at $16.00 odds with Ladbrokes, but Comerford thought it was a telling gallop from the favourite who often looks to set the pace.

“Yucatan leads all the time, so he takes on Cliffsofmoher, it’s a strong piece of work,” Comerford said.

“Just keep building on from start to finish, and finish strong past the post, and Yucatan has certainly done that, his work is very good.”

Yucatan won by a length and a half in the Herbert Power, although it could have been much more had jockey James McDonald not pulled him up dangerously with 50m to go.

The speedy Irish import was let down on the final bend, and ran home in a time of 2:26.47.

“You couldn’t have many better than he is, we’re in a good place and we’re very pleased with him, so hopefully he’ll repay us” Comerford went on to say.

Originally, many questioned the plan to hold Yucatan back for three weeks ahead of the Cup, but owner Nick Williams says it’s the right call.

“In hindsight I don’t think there’s any doubt, the way the horse is bouncing at the moment, I think it’s shown the lads it was the right call.”

Williams, who also owns The Cliffsofmoher, thinks the step up to the two-mile will more than suit both horses.

“I don’t think it’ll bother them out here, no. I’d be very confident in that, I think that’s the least of their problems” Williams said.