Case closed, Land of Plenty is a Group 1 horse.

Darren Weir’s impressive five-year old captured the $500,000 Toorak Handicap (1600m) at Caulfield on Saturday, and after the race, the champion trainer claimed it may not be his last.

‘He’s a Group 1 winner now and I don’t know it will be his last one either with the way that one went” Weir told Racing.com. 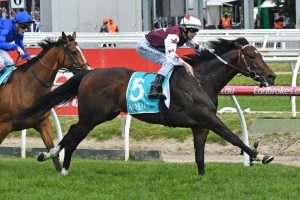 Land of Plenty, above, captured back-to-back wins for the Weir stable at Caulfield on Saturday.

Entering as the $4.20 favourite with Ladbrokes, Land of Plenty’s sat on the heels of last-start winner Hartnell, exploding in the final furlong to go on and win by a length and a half.

Racing home in a time of 1:34.52, jockey Damian Lane always thought his ride was a chance.

“I was lucky there was good speed on in a lovely time of the race, the horse did the rest” Lane said.

“We were in with a chance to try and get him midfield and he didn’t begin that well. and with the slow speed, I ended a bit further back than anticipated, but it didn’t matter come the corner they bunched up, and he was too good.”

“He certainly did deliver it, he got the perfect cart into it,” Weir said when asked about Lane’s ride.

“We got a beautiful cart into it and, you know, the Rupert Clarke and the Toorak were the sort of races we targeted for him because he’s a great type of horse, got a nice pedigree and those sort of standards.”

After running third in his Group 1 debut last start, Land of Plenty showed tremendous courage to run by Hartnell down the straight.

The Godolphin trained eight-year old was unlucky to finish second, but continues to improve following his win in the Epsom (1600m) a fortnight ago.

As for Lane, his extra hard work and commitment to make weight makes the victory even more special.

“It’s not every day I ride 53, but a little bit of extra work went into this, but it’s worth it when it pays off like this” Lane said after the race.