Although reluctant to say, three-year old Amphitrite will be put on a Thousand Guineas (1600m) path by trainer Darren Weir following a win in the Edward Manifold Stakes (1600m) at Flemington on Saturday. 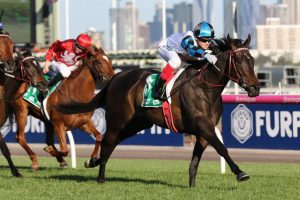 Amphitrite, above, salutes in the 2018 Edward Manifold Stakes.

Weir saw all three of his runners finish first, second and third, but despite an impressive day from the stable, he sounded a little unsure whether or not Amphitrite should run in next week’s $500,000 Group 1 race.

“I don’t really know to be honest, probably got to go there I suppose,” Weir told Racing.com.

“It might just all come too quick, you’ve obviously got to back up next week. I thought looking at her in the yard, she looked great today, she was big and strong, so she might be able to back up.”

Amphirite remains an $8.50 chance with Ladbrokes following her impressive win on Saturday, however she has firmed from $12.00 into $8.00 ahead of the Kennedy Oaks (2500m) on November 8.

Weir’s other runners, in particular Krone, looks a certainty to tackle the Thousand Guineas after running on strong on Saturday.

“I have no idea to be honest, I’m not sure about the winner but Krone definitely heads that way, she’s got going well enough” Weir said post-race.

Despite his uncertainty surrounding Amphitrite, the filly did well to run on from a wide position after Thousand Wishes got going in the final 400m.

“It’s hard to do this in our day and age, but she’s been really well managed by Darren Weir and his owners.” jockey Craig Williams said.

“I just love the way she floats, she was very good and dominant, the stable was very confident with her.”

Having now won three straight races, the filly out of two-time Group 1 winner Sebring is starting to develop a reputation for her turn of foot, something Weir credits Williams for.

“She’s been going on really well, just taken the right progression and after a late start, got a lovely run there today, I love that three-wide cart up in a race cause you’re sort of controlling the race, and that’s what Craig did, it was a terrific win and all three ran well” Weir said.

As for third placegetter Verry Elleegant, the Kenendy Oaks also looks to be her next assignment.

“The filly that ran third she’s probably more like an Oaks sort of horse, but really pleased with the way she attacked the line. Johnny rode her beautifully to attack the line.”

Full Kennedy Oaks odds can be seen below.