He left it until the very end, but Darren Weir trained Night’s Watch overcame a large field of 15 to claim the $150,000 Group 3 Naturalism Stakes (2000m) at Caulfield on Saturday.

Jumping from barrier 8, jockey Damian Lane found himself in a three-wide position on the final turn, only to charge home down the outside to win at the line in a time of 2:02.19.

The race looked to be won by fellow New Zealand born Rising Red on the inside draw. The talented five-year old had a gun run along the rails, but ran out of gas over the final furlong as Night’s Watch stole the win. 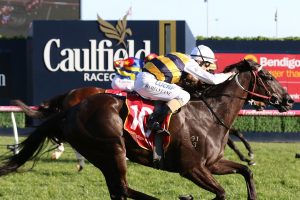 Night’s Watch, above, booked a spot in October’s $5 million Caulfield Cup with his win in Saturday’s Naturalism Stakes.

“He’s a really good horse, he missed the start again today which I suppose is something we’re going to have to work on,” Clark told Racing.com post-race.

“But he had a lovely rhythm and just pressed the button a bit early around the home corner, he got a bit lost.”

Missing the start didn’t help, but with the earmuffs on and second-elect Folkswood choosing to race on the speed early, Night’s Watch had plenty of open paddock in front to storm on home.

“Bit breathtaking their late, but he’s got the bob right” trainer Darren Weir told Racing.com after the race.

“Unfortunately he just didn’t begin well, and he just gets back a bit further than you would’ve hoped, but I guess they ran a quick furlong there which might have softened them up a bit late, but he’s starting to get better this horse, because he’s been a work in progress.”

With two other runs under his belt this prep, Night’s Watch’s start to the Spring isn’t quite as dour as Weir makes it sound. The five-year old won first-up at Caulfield over 1400m to begin September, and finished third in the $250,000 Group 2 Dato Tan Chin Nam Stakes (1600m) behind Homesman and Magic Consol a fortnight ago.

That potential could be on full display as Night’s Watch has now booked a spot in October’s $5 million Caulfield Cup (2400m), a race that has seen Weir’s talented gelding firm from $15 into $9 with Ladbrokes.

According to the champion trainer, the road ahead appears quite straight forward.