The promising stayer joins four other runners in the small field led by race favourite Tarka at $2.70. 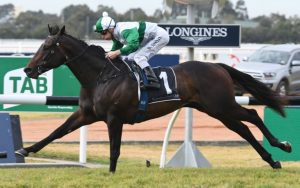 Thinkin’ Big, above, hopes to capture his third win in four starts at Rosehill on Saturday.

Thinkin’ Big has firmed from $6.50 earlier in the week into $5.00 with Ladbrokes ahead of his first-up run this Spring.

With only three races to his name, the colt out of Irish champion High Chaparral has won two of his three starts, most recently at Rosehill over 1500m earlier in July.

Jumping from barrier 1, Thinkin’ Big led for the entirety of the race and even found an extra gear after being challenged by Laburnum down the straight. He looks completely comfortable up on the speed, a tactic jockey Tim Clark will likely employ as he takes his first ride on the colt in Race 3.

David Payne’s Tarka will take some beating in this race, especially after winning three-straight. The three-year old most recently won the $196,000 Group 2 Stan Fox Stakes (1500m) at Rosehill a fortnight ago, beating home Dealmaker and the unlucky The Autumn Sun down the straight to pinch a win at the line.

Full Gloaming Stakes odds can be seen below.