Goldolphin owned Folkswood is hoping to return to winning form on Australian soil in the Group 3 $150,000 Naturalism Stakes (2000m) at Caulfield on Saturday, and jockey James Doyle insists Britain’s veteran stayer is well-suited to the race style down-under.

“He’s a very uncomplicated horse, he can race on-speed or he can sit back and you can ride him cold,” Doyle told RSN’s Racing Pulse on Thursday morning. 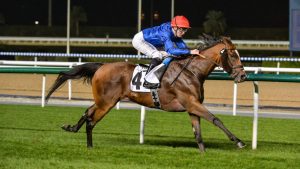 Having recently in Australia last November, Folkswood looks to improve on his winning form after winning the $256,000 Millenium Stakes (2000m) in Dubai back in February.

Similar to his race-style versatility, Doyle also feels the six-year old is well-suited to the travel.

“One thing I think he likes to do is travel and I think you can see that in his form book. I’m sure he’s enjoying himself in Melbourne so far” Doyle said.

Folkswood has drawn barrier 15 ahead of Saturday’s race, and as the $6.00 second-elect with Ladbrokes.com.au, speedmaps suggest Folkswood will need some luck down the straight if he hopes to be on pace with $3.50 favourite Night’s Watch.

Speaking of improving, Folkswood also hopes to replicate fellow Godolphin stablemate Home of the Brave’s success after transitioning from Ireland to Australia.

Doyle will be riding alongside on Irish born Jungle Cat in the same race, and feels Home of the Brave was always destined for success in Australia.

“I see he’s drawn a little bit wider than me at 10, he’s a horse I felt would always do very well over in Australia, his style of racing, he likes to put himself on the speed.”

Full Naturalism Stakes odds can be seen below.